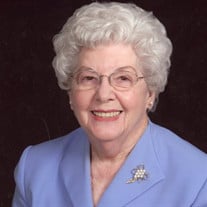 Dorothy Jo Tisdale departed her earthly home on October 31, 2017, to be with Jesus, her family and friends in heaven. She was born on August 21, 1922, in a big family farm house in Pattonville, Texas, a small community in Lamar County near Paris, Texas. Her parents were Virgil Aud and Fannie Hoover Schillings. At the time of her birth, her father was farming with his father-in-law on a large farm. When the oil boom began, the family moved to Seminole, Oklahoma, where they lived for several years while her father was employed with an oil company. In 1931, Dorothy’s father was transferred to Arp, Texas. At age 11 while living in Arp, she accepted the Lord as her Savior and was baptized at the First Baptist Church in Arp, Texas. After attending schools in Arp and Kilgore, she went to Gaston High School in nearby Joinerville, Texas, where she graduated in 1939. While attending Gaston High School, she met the love of her life, Albert J. Tisdale (A.J.), in 1938, when Dorothy was a junior and A.J. was a senior. While A.J. was attending Baylor University from 1938-1941, she lived with her Aunt Bess and Uncle Eli Wright and attended Kilgore Junior College from 1939-1941. After a three year courtship, Dorothy and A.J. were married on September 7, 1941, at the First Baptist Church in Turnertown, Texas, with the Reverend Harvey Elledge officiating. The marriage was attended by family and close friends. After their wedding, they moved to Mobile, Alabama, and then Houston, Texas, where A.J. was involved in military defense work. When A.J. entered the military in 1943, Dorothy moved back to Turnertown, Texas, where she spent the war years with her Aunt Bess and maternal grandmother, Ma Schillings. Her daughter, Dana Sue, was born in 1944 in Tyler, Texas. After the end of World War II, Dorothy and A.J. moved to McGregor, Texas, so that A.J. could complete his degree at Baylor University. Their daughter, Judith Ann, was born in 1946. After graduation, A. J. took a position with Humble Oil & Refining Company, which later became Exxon-Mobil. Dorothy, A.J. and their two daughters lived in McCamey, Texas, for several years before moving to Midland, Texas, for five years. While in Midland, Dorothy loved being a part of the First Baptist Church, and she was very active in WMU and Sunday School. The family moved from Midland to Houston in 1956 and then to Los Angeles, California, in 1961. While living in Los Angeles, Dorothy returned to college at Los Angeles State University and earned her degree in teaching. After graduation, she taught school at Glendora Elementary School from 1964-1966 and North Hollywood Elementary School from 1966-1967. Dorothy and A.J. returned to Midland in 1967. She taught school for five years in Midland before her retirement. After A.J.’s retirement from Exxon in 1981, they moved to Jacksonville, Texas. They lived in Jacksonville and Tyler, Texas, before returning to Midland in 2004. They again attended the First Baptist Church of Midland and enjoyed their final years in the community they loved. Dorothy and A.J. celebrated their 75th wedding anniversary on September 7, 2016. Dorothy was known as “Nana” to her grandchildren. Her loving and sweet disposition will be greatly missed by all. She was always eager to welcome her family members for a visit and to treat them with delicious cooking, especially her great pecan pies. With her big smile and laughter, she listened while her beloved A.J. (known as “Papa”) told jokes and shared family memories. Dorothy is survived by her daughter Dana Sue and husband William M. Holland and her daughter Judith Ann (Judy) and husband Michael J. (Mike) Canon, as well as 7 grandchildren and 11 great-grandchildren. She was preceded in death by her parents and her beloved husband of 75 years, Albert J. Tisdale. A family service was officiated by Senior Associate Pastor David Johnson of the First Baptist Church of Midland, Texas, on November 1, 2017, at Nalley-Pickle & Welch Funeral Home. Graveside services, under the direction of Crawford-A. Crim Funeral Home, will be held at the Lakewood Memorial Park Cemetery in Henderson, Texas, on November 3, 2017, at 12:00 noon, with the Reverend Donald James Tisdale presiding, with a visitation preceding from 10:00-11:00 at the funeral home. Pallbearers will be her grandchildren and great-grandchildren. Her grandchildren include Michael Canon and his wife Meredith, Joanna Holland Thiele, Stephen Canon and his wife Honor, Murrie Holland, Christopher Canon and his wife Cory, Elizabeth Canon Moore and her husband Todd, and Allison Holland. Her great grandchildren include William, Lawrence and Olivia Thiele; Jackson, Lenore and Noah Canon; Clare and Cate Moore; Caroline and Eloise Canon; and James Canon. In lieu of flowers, memorial donations may be made in Dorothy Jo Tisdale’s name to the First Baptist Church of Midland, Texas, for WMU and Missions, 2104 West Louisiana Avenue, Midland, Texas 79701. Online condolences can be made at www.npwelch.com and www.crawfordacrim.com.

Dorothy Jo Tisdale departed her earthly home on October 31, 2017, to be with Jesus, her family and friends in heaven. She was born on August 21, 1922, in a big family farm house in Pattonville, Texas, a small community in Lamar County near... View Obituary & Service Information

The family of Mrs. Dorothy Jo Tisdale created this Life Tributes page to make it easy to share your memories.