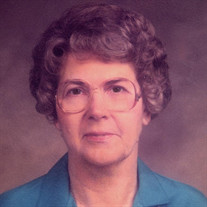 A Life Well Lived Dorothy Maloney walked through the open door into the everlasting light on Saturday, December 30, 2017, at her home surrounded by her son and daughter, Mike Maloney and Kathy Porter. At the age of 99 years and 4 months, hers was a long and well lived life. She was born on the outskirts of Henderson, Rusk County, Texas on August 21, 1918, and attended schools at Grandview, Oak Hill, and Henderson. After graduation she worked for the telephone company as a switchboard operator, married her life partner James Douglas Maloney in 1940, and after he shipped out to Seoul, Korea with the U.S. Army, moved back to the Oak Hill Community where she lived and raised her family as a consummate wife, mother, and grandmother. After James Douglas’ death in 1980 she continued to take care of her mother-in-law, Linnie Maloney, until her death in 1992. Dorothy was also preceded in death by her parents, Henry and Elizabeth Berry, son Jerry Maloney, and her siblings Ray, Faye, Randolph, and Emmett. She leaves to cherish the person she was, her children Mike and Kathy, 10 grandchildren, 12 great-grandchildren, and 6 great-great-grandchildren and loving nieces and nephews. A quiet woman of faith and constancy who was always there for family with words of encouragement and a helping hand, she was the heart of the Maloney family who helped shape her children’s lives by her Christian example. But even though she is gone, she has left the legacy of her love and perseverance. The way she touched and influenced her family’s lives will remain always. A memorial service conducted by Don Edmiston, Associate Pastor of First Baptist Church, will be held on Monday, January 1, 2018, at 11:00 a.m. at Crawford-A. Crim Funeral Home. In lieu of flowers, memorial donations may be made to Henderson Interchurch Ministries at 769 SH 64 W, Henderson, TX 75652. Honorary pallbearers will be Brian Decuir, Braden Decuir, Jared Maloney, Adam Maloney, Lance Maloney, and Bobby Byrd. Special thanks are expressed to Hearts Way Hospice and to caregivers, Madeline Kennedy, Pam Chalk, Merlene Thompson and Gabby Moss for their loving care. Words of comfort may be shared with the family at www.crawfordacrim.com.

A Life Well Lived Dorothy Maloney walked through the open door into the everlasting light on Saturday, December 30, 2017, at her home surrounded by her son and daughter, Mike Maloney and Kathy Porter. At the age of 99 years and 4 months, hers... View Obituary & Service Information

The family of Mrs. Dorothy Maloney created this Life Tributes page to make it easy to share your memories.