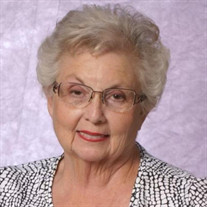 Funeral services for Mrs. Dorothea Paulette Martin Roberson, 79, of Troup, will be held at 9:30 a.m. on Saturday, April 10, 2021, at J-C Cowboy Church in Mt. Selman with Pastor Mike Blumn officiating. Interment, with Order of the Eastern Star honors, will follow at Pinecrest Cemetery in Troup under the direction of Crawford-A. Crim Funeral Home. The family will receive friends from 9:00 a.m. until service time on Saturday, at the church. A register book will be available at the funeral home from 8 a.m. until 5 p.m. on Thursday and Friday, April 8-9, for family and friends that wish to come by and pay their respects. Flower arrangements may also be sent to Crawford-A. Crim Funeral Home. Dorothea passed from this life on April 3, 2021, at Hospice Homeplace in Tyler. She was born in Hot Springs, AR to James and Dorothea Martin on 6 August 1941. She worked as a medical assistant in San Antonio, TX until she moved to Troup, TX and married John Roberson in 1988. During her time in Troup she and John enjoyed wood working, raising cattle, spending time with family and friends as well as being involved in her community. During her younger years she worked various jobs and raised her two sons into adulthood. Dorothea was a member of the Order of the Eastern Star Chapter 599 in Henderson, TX and Past Worthy Matron. She held several positions in the OES including the Chapter Secretary and she will be greatly missed by her chapter. She is survived by her sisters Jonette Sullivan of Hot Springs, AR; Margret Gore and her husband David Gore of Little River, SC; brother Fred Martin and his wife Virginia Martin of Jacksonville, AR; son Jack Smith and his wife Kimberly Smith of Troup, TX; grandsons Christian Smith and his wife Harmony Smith of Newberry, FL; Jonathan Smith and his wife Brooke of Tyler, TX; and 5 great grandchildren as well as several nieces and nephews She is preceded in death by her father James A. Martin, mother Dorothea Martin, sister Mary Elise Kolb, brother James “Sunny” Martin, husband John M. Roberson and son Floyd Anthony “Tony” Smith. Pallbearers are Jonathan Smith, Richard Lockhart, Tony Mukleroy, Patrick Singer, Jason and Golden Halbert. Words of comfort may be shared with the family at www.crawfordacrim.com.

The family of Mrs. Dorothea Paulette Martin Roberson created this Life Tributes page to make it easy to share your memories.