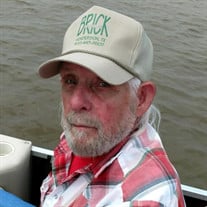 Funeral services for Mr. Donnie Howeth, 77, of Henderson, will be held at 2:00 p.m. on Thursday, December 31, 2020, in the chapel at Crawford-A. Crim Funeral Home with Tracy House and Sondra Costlow officiating. Interment will follow at Strong Cemetery under the direction of Crawford-A. Crim Funeral Home. The family will receive friends from 5-7 p.m. on Wednesday, December 30, at the funeral home. Mr. Howeth passed from this life on December 26, 2020, at his residence. He was born September 14, 1943, and was a life-long resident of Henderson where he grew up attending Roquemore Missionary Baptist Church. Donnie proudly served his country in the United States Army during the Vietnam Conflict and achieved the rank of E-5. He later went to work for Henderson Clay Products and retired from Boral Bricks after 30 years of service. He was preceded in death by his parents, Elgin (Mike) Howeth and Lucille (Sindy) Guinn Howeth; and son, Charles "Chuck" Howeth. Survivors include his daughter, Dee Dee Howeth of Kilgore; grandson, Joshua Fears of Kilgore; cousins and sisters at heart, Gail Howeth of Henderson, and Barbara Howeth Strock of the Chapman Community; cousin and niece at heart, Tracy House and husband Jeff of Mt. Enterprise and their children, Jake Arnold and wife Danielle, and Jedidiah House; cousins, Chad and Frieda Holland and their daughter Ashley Holland of Henderson, Pam and Robert Brinkley of Ft. Worth, and Diana and Joe Moninger and their children Landon and Sage of Ft. Worth; as well as a host of cousins and loving family and friends. Pallbearers will be Kenneth Watson, Jeff House, Charlie Graham, Mike Tillison, Jake Arnold, Jedidiah House, and Chad Holland. Honorary pallbearer will be Johnny Tillison. Words of comfort may be shared with the family at www.crawfordacrim.com.

Funeral services for Mr. Donnie Howeth, 77, of Henderson, will be held at 2:00 p.m. on Thursday, December 31, 2020, in the chapel at Crawford-A. Crim Funeral Home with Tracy House and Sondra Costlow officiating. Interment will follow at Strong... View Obituary & Service Information

The family of Mr. Donnie Howeth created this Life Tributes page to make it easy to share your memories.

Funeral services for Mr. Donnie Howeth, 77, of Henderson, will...