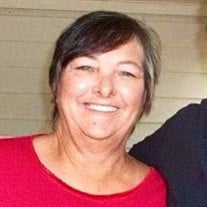 Funeral services for Ms. Donna K. Gentry, 71, of Henderson, will be held at 2:00 p.m. on Monday, January 18, 2021, at First Christian Church with Pat Adams and Ronnie Jack Keith officiating. Interment will follow at Lakewood Memorial Park under the direction of Crawford-A. Crim Funeral Home. The family will receive friends from 2-4 p.m. on Sunday, January 17, at the funeral home. Ms. Gentry passed from this life on January 13, 2021, at UT Health in Tyler. She was born July 6, 1949, in Henderson to the late Clay and Mary (Vinson) Jones and spent most all of her life in Henderson. Donna devoted her career to the Community Health Core, formerly Sabine Valley, for the state of Texas and worked with special needs children in the early stages of their lives. She enjoyed keeping up with politics and would discuss them at length with family and friends. Donna was a life-long member of First Christian Church of Henderson where she was an Elder and on the Board of Elders. She loved to spend time with her family, and she never missed an event that one of her children or grandchildren were involved in whether it be sports, band concerts, or other events. In addition to her parents, she was preceded in death by her son, John-Eric Gentry. Survivors include her son, Clay Gentry and wife Gina of Henderson; brother, Curtis Jones and wife Karen of Mount Ida, Arkansas; sister, Helen Kelley of Henderson; grandchildren, Clay Gene Gentry, Marissa Taylor Gentry, and Kanon Chase Adams; as well as a host of nieces, nephews, other family and many friends. Pallbearers will be Clay Gentry, Buddy Beall, Zac Powell, Bobby Davila, Keven Johnston, and Derek Easley. Words of comfort may be shared with the family at www.crawfordacrim.com.

The family of Ms. Donna K. Gentry created this Life Tributes page to make it easy to share your memories.

Funeral services for Ms. Donna K. Gentry, 71, of Henderson, will...