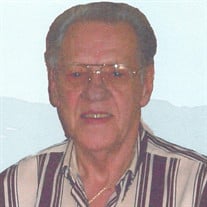 Graveside services for Mr. Donald Toivanen, 81, of Henderson, will be held at 10:00 a.m., Monday, February 8, 2021, in the Mausoleum at Rusk County Memorial Gardens. Interment to follow under the direction of Crawford-A. Crim Funeral Home of Henderson. The family will receive friends from 2:00 p.m. - 4:00 p.m., Sunday, February 7, 2021 at the funeral home. Due to the current COVID-19 pandemic, masks or face coverings are strongly recommended, however not required, for the health and safety of all those in attendance for a visitation or service. Mr. Toivanen passed from this life on February 2, 2021, at his residence in Henderson. He was born October 28, 1939, in Ishpeming, Michigan to the late Victor and Aili (Toumi) Toivonen and has lived in the Henderson area for the last 30-40 years. Donald grew up attending Ishpeming schools. After his education, he served his country in the United States Army Reserves and later in the Navy. He retired as a correctional officer for Bradshaw State Jail. Donald was an avid golfer and enjoyed the outdoors. He attended Open Door Baptist Church in Henderson. In addition to his parents, he was preceded in death by his step-daughter, Brenda Work; and 2 brothers, Arnold Toivonen and Richard Toivonen. Survivors include his wife of 20 years, Sally Toivanen of Henderson; son, Dwayne Toivanen and wife Marlene of Grants, New Mexico; daughter, Aili Toivanen and her significant other Frank Jaramillo of Houston; step-children, Debi Rodgers and husband J.B. of Pritchett, Paul Seward Jr. and wife Belinda of Longview, and Kim Nadjkovik of Hesperia, Michigan; son-in-law, John Work of Dallas; brothers, Marvin Toivonen of Ishpeming, Michigan and Neal Toivonen of Summerdale, Alabama; 14 grandchildren; 10 great-grandchildren; and a host of nieces, nephews, other family and friends. Words of comfort may be shared with the family at www.crawfordacrim.com.

Graveside services for Mr. Donald Toivanen, 81, of Henderson, will be held at 10:00 a.m., Monday, February 8, 2021, in the Mausoleum at Rusk County Memorial Gardens. Interment to follow under the direction of Crawford-A. Crim Funeral Home of... View Obituary & Service Information

The family of Mr. Donald Toivanen created this Life Tributes page to make it easy to share your memories.