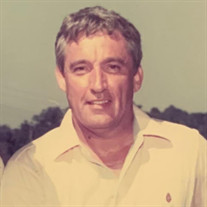 Donald “Lynn” Browne, 77, a resident of Tyler, former long time resident of Henderson, passed from this life on July 4, 2020. He was born January 2, 1943, in Corsicana, the only child of Don and Bryna Browne who both preceded him in death. Lynn grew up in Roswell, NM graduating high school in 1961. He was a star baseball player and he and his team won the first NM State championship for Roswell High School. He was later invited to tryout for the San Francisco Giants, but turned down their offer to start on the farm team. Instead he met and married Janis, started a family and decided to become a chiropractor. He graduated from Palmer College of Chiropractic in 1974 and then moved his family to Henderson, opening Browne Chiropractic Center, which later became Allied Pain Management Clinic, which he owned and operated until 2010. Lynn was a long time member of Hollytree Country Club and Henderson Country Club where he loved playing golf and creating great memories with his friends. Lynn was an avid golfer, and played courses all over the US. Although Lynn was a successful healer, chiropractor, business man, and athlete, his greatest joy was the love and happiness of his family. Lynn is survived by his two grateful daughters, Vicki Rowe and husband Michael, Sheri Danielson and husband Guy. He was “Poppy” to his five grandchildren: Laken Lewis, Hunter Hobbs, Karsyn Dupree, Tucker and Gage Stillwell, as well as his great grandchildren, Maeleigh Jo and Everett Lewis, Pheonix and Sage Dupree. A celebration of life for Dr. Browne will be held at a later date. In lieu of flowers, the family requests donations be made in his memory to the American Heart Association at 7272 Greenville Ave., Dallas, TX 75231. Words of comfort may be shared with the family at www.crawfordacrim.com.

The family of Dr. Donald "Lynn" Browne created this Life Tributes page to make it easy to share your memories.