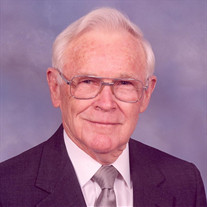 Donald Q. Hooks, 95, died on June 22, 2018, at Azalea Place, a caring and loving assisted living community in Henderson. Throughout his life, he nourished people around him with his love, faith, sunny disposition, and optimism. Donald was born in Fort Smith, Arkansas, on February 6, 1923, to Q.P. and Veleta Hooks. He graduated from Jefferson High School in 1940, where he starred in football, and then attended Texas A&M his freshman year and was a member of the Corps of Cadets. After working as a welder and pipe fabricator in New Martinsville, West Virginia, Donald enlisted in the U.S. army in October 1945, and was assigned to the U.S. Cavalry unit. He then was accepted to the Armored Officer Candidate School at Fort Knox, Kentucky, graduating as a 2nd Lt. He was a Cavalry Platoon Leader before being assigned to Europe. Donald served in Germany, and received the American Campaign Medal, World War II Victory Medal, and Occupation Medal for service in Germany. Before leaving military service, he was promoted to 1st Lt. Donald was long time co-owner of Hooks Machine Works, Inc., first with his father and uncle Bill Hooks, and then with his brother Bob Hooks, first in Turnertown and then in Kilgore, before retiring in 1994. He was an active member of the First United Methodist Church in Henderson since 1961, especially enjoying the PALS Sunday School class and the choir. He was a former scoutmaster of Troop 316 sponsored by the church, and was honored as Scoutmaster of the Year by the Arrowhead District in 1959. He was a 50 years plus Master Mason of Clinton Lodge #23 A.F.& A.M. He also was a member of the Alpha Omega Kiwanis Club. Donald was preceded in death by his parents, Q.P. and Veleta Hooks; his wife of 65 years Frances (Frankie) K. Hooks; and his three brothers, Corwin, Charles, and Bob. Left to honor Donald are his two sons, Donald Lee Hooks of Northport, Alabama, and Michael Quinley Hooks of Los Angeles, California; his sister, Mrs. Billie Manck of Brownsboro; and several nieces and nephews. The Hooks family extends our heartfelt gratitude to the staffs of HeartsWay Hospice of Northeast Texas, Azalea Place in Henderson, and Brookdale Henderson in Henderson, and caregivers Denise Harris, Shannon Harris, and Virginia Jacobs for their caring and loving support of our father and brother. The family will receive friends from 5-7 p.m. on Tuesday, June 26, at Crawford-A. Crim Funeral Home in Henderson, with funeral services being held at 10:00 a.m. on Wednesday, June 27, 2018, at First United Methodist Church in Henderson with Rev. David Luckert officiating. Interment will follow at Lakewood Memorial Park under the direction of Crawford-A. Crim Funeral Home. Pallbearers will be Keith Hooks, Dale Hooks, Brandon Hooks, Curtis Seelbach, Steve Williams, and Foy Brown. Words of comfort may be shared with the family at www.crawfordacrim.com.

Donald Q. Hooks, 95, died on June 22, 2018, at Azalea Place, a caring and loving assisted living community in Henderson. Throughout his life, he nourished people around him with his love, faith, sunny disposition, and optimism. Donald was... View Obituary & Service Information

The family of Mr. Donald Q. Hooks created this Life Tributes page to make it easy to share your memories.