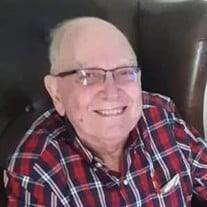 Graveside services for Mr. Donald E. Brightwell, 88, of Henderson, will be held at 2:00 p.m., Tuesday, April 27, 2021, at Lakewood Memorial Park Cemetery with Jason Taylor officiating. Interment with Military Honors will follow under the direction of Crawford-A. Crim Funeral Home of Henderson. Visitation will be from 6:00 p.m. - 8:00 p.m., Monday, April 26, 2021, at Crawford-A. Crim Funeral Home. Mr. Brightwell passed away Wednesday, April 21, 2021, at Christus Good Shepherd in Longview. He was born November 14th, 1932, to the late Bennett Brightwell and Lillian Fay Mikles and was a long-life resident of Henderson. Donald graduated from Henderson High School in 1951. He served in the US army 531st Anti-Aircraft Artillery BN. He began his long-life career in the oil & gas business as a lease man, and later becoming his own oil & gas operator drilling and operating several successful wells in the East Texas Field. In later years he began Brightwell Brahman Ranch breeding and raising cross-bred commercial cattle, and later investing into registered Brahman cattle, and being one of the first to bring this breed of cattle into the East Texas Region. He bred, and raised both registered and commercial cattle, also showing Brahmans throughout Texas, Louisiana, and Mississippi, leading to several of his cows and bulls into the register of renown which was huge accomplishment. He started Royal “B” Cattle Service that hosted annual registered Brahman sales, and operated for 35 years, resulting in the longest running Brahman privately owned sale in the U.S. ending in 2012. He served as the cattle superintendent at the East Texas State Fair in Tyler for nine years. Mr. Brightwell was elected a director of the American Brahman Breeders Association (ABBA) and proudly served the ABBA for 9 years. He was a member at the West Main Baptist church for over 40 years as a deacon of the church, Sunday school teacher and as the choir director. He was a very kind and compassionate Christian and would help anyone who needed it. In addition to his parents, he was preceded in death by his sister, Dorothy Brightwell; and cousin, Keith Brightwell, who he thought of as a son. Survivors include his daughters, Alice Brightwell of Carthage and Donna Brightwell of Mellissa; five grandchildren, Brent Fuller, Krystal Craig-Hill and husband Jason Hill II, Ashley Craig, Kyle Grace, and Eric Grace; ten great-grandchildren, which he adored; and Brant Bane who he also thought of as a son. Pallbearers will be Brant Bane, Eric Grace, Kyle Grace, Brent Fuller, Benjamin Wooten, and Luke Owens. Honorary Pallbearers will be Payton Craig, Eric Walker, Ozzie Grambling, R.D. Lynch, and David Willis. In lieu of flowers, memorial donations may be made to American Junior Brahman Association at P.O. Box 3249, Bryan, Texas, 77805-3249. Words of comfort may be shared with the family at www.crawfordacrim.com.

The family of Mr. Donald E. Brightwell created this Life Tributes page to make it easy to share your memories.