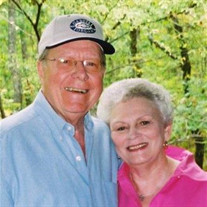 Don Richard Turlington, 80, of Henderson, died after many health setbacks on Tuesday, July 30th, 2019. Don was born on May 16, 1939, in Henderson, Texas. His memorial service will be held on Friday, August 2, 2019, at First Christian Church in Henderson, Texas at 10:00 AM with Rev. John Cunyus officiating, under the direction of Crawford-A. Crim Funeral Home. A visitation will be held from 9-10 AM prior to the service at the church. Don graduated from Henderson High School, then went on to graduate from Kilgore Junior College, where he was a member of the Kilgore Ranger Band, and finally, on to Texas A&M, graduating in spring 1961 with a Bachelor of Science in Electrical Engineering. He was a proud Aggie, and he enjoyed attending Cotton Bowl games with friends, during the Southwest Conference days, any time the Aggies were playing. Following college, he went to work for Southwestern Bell. He then worked as the chief engineer for Pritchard & Abbott, before going into business for himself in 1985. He moved back to Henderson in the late 90s, where he continued working with ad valorem taxes for complex properties with CSI as a partner, until his retirement in 2015. His family was his greatest achievement and joy in his life. He is survived by his wife, the love of his life, Georgann, his daughter Amy Turlington Chambers and her husband Sam, his son Kyle Turlington and his wife Young Hae and Don’s beloved grandson, Charlie. He also leaves behind niece Kim Turlington Doerge and her husband Matt; nephew Tim Turlington and his wife Amy; niece Melanie Henderson Amundson and her husband Brent; and nephew Matt Henderson and his wife Beth. There are also numerous cousins, brothers and sisters-in-law, great nieces and nephews and too many friends to count. He is preceded in death by his father, Richard Olin “Babe” Turlington, his mother, Lorene Crawford Turlington, and his brother, Andrew Olin Turlington. Words of comfort may be shared with the family at www.crawfordacrim.com.

Don Richard Turlington, 80, of Henderson, died after many health setbacks on Tuesday, July 30th, 2019. Don was born on May 16, 1939, in Henderson, Texas. His memorial service will be held on Friday, August 2, 2019, at First Christian Church... View Obituary & Service Information

The family of Mr. Don Turlington created this Life Tributes page to make it easy to share your memories.

Don Richard Turlington, 80, of Henderson, died after many health...