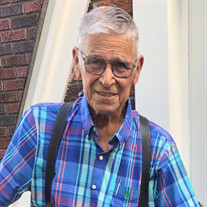 Graveside services for Mr. Don Sample, 80, of Henderson, will be held at 2:00 p.m. Friday, May 21, 2021 at Rusk County Memorial Gardens with Bro. Devin LaBay officiating. Interment will follow under the direction of Crawford-A. Crim Funeral Home. The family will receive friends from 12:00 p.m. to 1:00 p.m. Friday, May 21, 2021 at the funeral home. Mr. Sample passed away Tuesday, May 18, 2021 at Hospice of East Texas in Tyler. He was born June 12, 1940 to John B. and Virgie Irene (Williams) Sample in Roscoe, Texas. He worked for Dallas Power and Lights until 1976, when he and his family moved to Henderson and he went to work for Texas Utilities. He retired from Texas Utilities in 1999. He served his country as an Airman First Class in The United States Air Force. He was a member of South Main Church of Christ. He was preceded in death by his parents, John and Virgie Sample; grandson, Brandon Sample; father and mother-in-law, Doyn and Oleta Walker; two sisters, Marcia Mettler, Janie Kmiec; and brother-in-law, Dwain Walker. Survivors include his wife of sixty one and a half years, Sue Sample of Henderson; children, Susan Bowland and husband Mike of Henderson, Todd Sample and wife Julie of College Station; brother, Michael Sample and wife Margaret of Seabrook; four granddaughters, Adaleigh Bowland, Courtnie Sample, Ashleigh Sample, Emma Sample; brother-in-law, Bob Kmiec of Midland; and a host of nieces, nephews, other family and friends. The family would like to say a special "Thank You" to Dr. Roy Gerard and his team at The Centers for Kidney Care in Tyler, and the staff at Fresenius Kidney Care in Carthage. Pallbearers will be Trent Bell, Mike Bowland, Roy Dorsey, Brad Welch, A.J. Cook, and Dr. John Hillin. In lieu of flowers, the family requests donations be made to Arms of Hope, 21300 State Highway 16 North, Medina, Texas 78055, or the South Main Church of Christ Missions Fund, 402 South Main Street, Henderson, Texas 75654. Words of comfort may be shared at www.crawfordacrim.com.

Graveside services for Mr. Don Sample, 80, of Henderson, will be held at 2:00 p.m. Friday, May 21, 2021 at Rusk County Memorial Gardens with Bro. Devin LaBay officiating. Interment will follow under the direction of Crawford-A. Crim Funeral... View Obituary & Service Information

The family of Mr. Don Sample created this Life Tributes page to make it easy to share your memories.

Graveside services for Mr. Don Sample, 80, of Henderson, will...