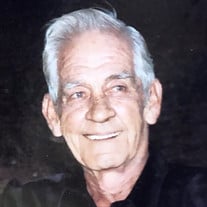 Don Russell Dennis passed away at UT Health Science Center in Tyler, Texas on March 15, 2019, surrounded by his loved ones. Don was born August 7, 1936, in Henderson, Texas, and was a lifelong resident of the Shakerag/Good Springs community. He was a member and deacon of Sardis Baptist Church, which is also where, in December 1956, he married the shy young girl he met in an East Texas purple hull pea patch. As a boy, Don was forced to grow up fast and hard, making tough decisions early in life in order to take care of his family. Because of this, not many men can claim a better work ethic than Don Dennis. He was logging the local piney woods when the custom was to load the logs with just two mules instead of a tractor. He worked for Mr. DC Long for more than 30 years while maintaining various businesses of his own. After a full day of work, he could be found delivering ice, running a backhoe, or working in his large garden in order to provide for his family. Don also served in the National Guard and was honorably discharged after serving from 1954 to 1963. During his service, he learned to box and developed a helluva mean Left. His fighting spirit was present all the way to the very last of his days. Just as he worked hard, Don also played hard. He loved to spend his free time at the Red River, fishing with his son, grandsons, and great-grandsons. A lover of coffee, buttermilk, and homemade vanilla ice cream, he also loved a good story and a laugh, and no one could escape his wicked sense of humor and sharp wit. Everyone who knew him knew that Don’s true pride, however, was his family. His daughter, Elaine Adkison, and sons, Larry Dennis and Vaughn Dennis (and wife, Kathy); his grandchildren Collen Hughes (and wife, Tracy), Wendi Hodges (and Don’s one and only “favorite grandson-in-law,” Beau), Jonas Deaton, Alex Adkison, Evan Dennis, and Vallen Dennis; and his great-grandchildren Corbin, Shelby and Ashby Hughes, Colt, Lilah, and Duke Hodges, and Lennon Adkison. Don was preceded in death by his loving wife of nearly 60 years, Margaret Annette Dukes Dennis. He would tell you that her love, patience, and forgiveness have been his whole world. Meanwhile, the family would tell you that while the holes in our hearts left by the losses of our Gran and now Daddy Don are currently too painful to contemplate, the unconditional love in which they raised us and the many lessons and memories they left behind will never be forgotten. The family is deeply grateful for the outpouring of love, prayers, and support in the many heartfelt forms. There are too many people to thank individually; however, we say thank you from the bottom of our hearts to the family, friends, caregivers, and even total strangers for their acts of kindness. A memorial visitation for Mr. Dennis will be held from 6-8 p.m. on Wednesday, March 20, 2019, in the chapel at Crawford-A. Crim Funeral. A private family buriel will be held at a later date under the direction of Crawford-A. Crim Funeral Home. If desired, memorial contributions may be made to Sardis Baptist Church at 13174 CR 4187 S., Henderson, TX 75654. Words of comfort may be shared with the family at www.crawfordacrim.com.

Don Russell Dennis passed away at UT Health Science Center in Tyler, Texas on March 15, 2019, surrounded by his loved ones. Don was born August 7, 1936, in Henderson, Texas, and was a lifelong resident of the Shakerag/Good Springs community.... View Obituary & Service Information

The family of Mr. Don R. Dennis created this Life Tributes page to make it easy to share your memories.