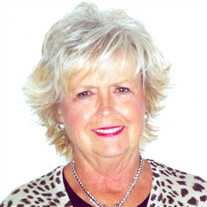 Graveside services for Mrs. Diane Morris Whiteside, 81, of Henderson, will be held at 10:00 a.m. on Monday, August 27, 2018, at Bethel Cemetery with Jason Taylor officiating. Interment will follow under the direction of Crawford-A. Crim Funeral Home. The family will receive friends from 5-7 p.m. on Sunday, August 26, at the funeral home. Mrs. Whiteside passed from this life on August 24, 2018, at Autumn Leaves in Henderson. She was born July 28, 1937, in the Bethel community of Rusk County to the late Walter and Aline (Gary) Morris. Diane lived life to the fullest as a lifelong resident of Rusk County, and she attended Laneville schools. She retired from Easttex Telephone and then went to work for Citizens National Bank where she retired as a bank teller. Diane later worked as a receptionist for Crawford-A. Crim Funeral Home. She grew up in and was a long time member of the First United Methodist Church in the Bethel community and later attended Bar None Cowboy Church. In addition to her parents, she was preceded in death by her husband, Bobby Russell Whiteside; son, Joey Whiteside; and grandson, Kory Whiteside. Survivors include: daughter and son-in-law, Joni and Rod Boaz of Tyler; daughter-in-law, Sherry Whiteside of Henderson; brother, Adrian Morris and wife Dana of Tyler; grandchildren, Kirby Rains and husband Stephen of Henderson, and Carly and Mason Boaz of Tyler; great-grandchildren, Stella Jo Rains and Russell Rains; and a host of nieces, nephews, family and friends. Pallbearers will be Rod Boaz, Mason Boaz, Stephen Rains, Russell Rains, Gary Johnson, Chris Woodard, and Richard Woehl. Honorary pallbearers will be her nephews and special friends. Words of comfort may be shared with the family at www.crawfordacrim.com.

Graveside services for Mrs. Diane Morris Whiteside, 81, of Henderson, will be held at 10:00 a.m. on Monday, August 27, 2018, at Bethel Cemetery with Jason Taylor officiating. Interment will follow under the direction of Crawford-A. Crim Funeral... View Obituary & Service Information

The family of Mrs. Diane Morris Whiteside created this Life Tributes page to make it easy to share your memories.