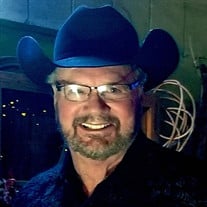 Mr. Dennis Smith, 74, of Henderson passed from this life on August 23, 2020 at his residence. He was born September 17, 1945 in Teague, Texas to the late Elvin George and Berta Aileen (Pickett) Smith. Dennis was the former owner of Fairway Ford. He was a member Bar None Cowboy Church. Being born into a military family, Dennis embarked on a life of world travel including multiple years spent in Japan and France with long family vacations traveling to Germany and Spain. Upon returning to the United States, the family and Dennis spent time in El Paso, Texas before the family moved to southern Colorado where Dennis graduated from Canon City High School. It was this travel that afforded Dennis the opportunity to meet so many people from so many different walks of life. These interactions with people from different cultures forged Dennis into the confident, dynamic, and loving Man that he was. To say that Dennis “never met a stranger” is truly an understatement. After High School in Colorado, and still in his teens, Dennis worked his way up from a part-time position at a Canon City Ford dealers parts department, then into selling Case Heavy Equipment, Managing a Drilling Fluid Company, and on to managing multi-million dollar Ford Dealerships from El Paso to San Antonio to finally the Managing Partnership in Henderson at Fairway Ford where he found his true happiness while joyfully sharing his life and Christian Faith with his beloved Rose Marie, who had been by his side at every turn of his travels through life’s journey. They both enjoyed their beautiful home on Lake Striker, drinking coffee and watching the sun rises together, marveling at God’s graces on them both. Above all, Dennis was intensely proud of both his Colorado and Tennessee families, where his two daughters and all of his grandchildren and great grandchildren reside. He reveled in their many accomplishments, and would fairly glow and beam with pride when speaking of them as he often did when keeping in touch with his Sister and Brother. He was a favorite, larger-than-life Uncle to his Nieces and Nephew where he always the highlight of any trip to Texas. He was always there to present a bible reading at a wedding, take them horseback riding, find the best places to go dancing or the best places to go fishing. He did it all, and he is forever loved for doing it. He was preceded in death by his parents, George and Berta Smith; and son, Vince Mullins. He is survived by his wife of 39 years, Rody Smith of Henderson; mother-in-law, Doris House; children, Carrie Ary and husband John Paul of Cannon City, Colorado, Katrina Fish and husband David of Munford, Tennessee; grandchildren, Sarah Phillips and husband Nick of Cannon City, Colorado, Joshua Ary and wife Christi of Cannon City, Colorado, Samantha Trahern and husband Cooper of Cannon City, Colorado, Libby Ary and fiancé Kevin Czarnecki of Denver, Colorado, Austin Griffin of Henderson, Ian Paul Mullins of Henderson, David Aric Fish of Denver, Colorado, and Dennis Ryan Fish of Denver, Colorado; great-grandchildren, Charley Trahern, Addison Phillips, and Jett Paul Ary; brother, Paul Smith and wife Pam of Maryland; sister, Phyllis Pell and husband Toby of Indiana; and a host of nieces, nephews, family, and friends. In lieu of flowers memorials can be to Henderson Animal Shelter 1201 Highland Drive Henderson Texas 75652. Words of comfort may be shared with the family at www.crawfordacrim.com.

Mr. Dennis Smith, 74, of Henderson passed from this life on August 23, 2020 at his residence. He was born September 17, 1945 in Teague, Texas to the late Elvin George and Berta Aileen (Pickett) Smith. Dennis was the former owner of Fairway Ford.... View Obituary & Service Information

The family of Mr. Dennis Smith created this Life Tributes page to make it easy to share your memories.

Mr. Dennis Smith, 74, of Henderson passed from this life on August...