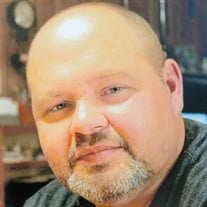 Graveside services for Mr. David Wayne Hornsby, 48, of Henderson, will be held at 2:00 p.m. on Friday, November 12, 2021, at Zion Hill Cemetery with Rev. Matt Gholson officiating. Interment will follow under the direction of Crawford-A. Crim Funeral Home. The family will receive friends from 5-7 p.m. on Thursday, November 11, at Crawford-A. Crim Funeral Home. Mr. Hornsby passed from this life on November 7, 2021, at UT Health in Tyler. He was born December 22, 1972, in Henderson to the late Wayne and Debbie (Sedgwick) Hornsby and lived most of his life in Henderson. David graduated from Henderson High School in 1991 and went on to attend Stephen F. Austin State University where he graduated with a BS in Accounting in 1995. Mr. Hornsby worked in maintenance for Bradshaw State Jail for 10 years and later went to work for Sadler’s Smokehouse. He was an avid fisherman and loved the Dallas Cowboys and Texas Longhorns. David was also a member of Ebenezer Missionary Baptist Church. In addition to his parents, he was preceded in death by his sister, Jennifer Lynn Hornsby; and grandparents, Ezell and Robbie Hornsby, and Mary Lou Sedgwick. Survivors include his wife, Cindy Lee Hornsby of Henderson; grandfather, Leroy Sedgwick of Henderson; children, Kelton Ashcraft of Corsicana, and Autumn Ashcraft of Henderson, and their mother, Kim Gray of Henderson; brother, Brian Hornsby and fiancé Trish Falknor of League City; grandchildren, Parker McCoy, Porter McCoy, Prayson McCoy, and Aerolynn Smith; as well as a host of aunts, uncles, nieces, nephews, other family, and many friends. Honorary pallbearers will be Josh Hornsby and Marvin Steveson. Words of comfort may be shared with the family at www.crawfordacrim.com.

Graveside services for Mr. David Wayne Hornsby, 48, of Henderson, will be held at 2:00 p.m. on Friday, November 12, 2021, at Zion Hill Cemetery with Rev. Matt Gholson officiating. Interment will follow under the direction of Crawford-A. Crim... View Obituary & Service Information

The family of Mr. David Wayne Hornsby created this Life Tributes page to make it easy to share your memories.