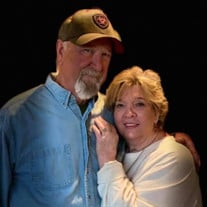 David Glen Keeling, age 69, passed away on Thursday, August 26, 2021. David was born December 12, 1951 to Billy and Nell Keeling in Overton, TX. He grew up in Henderson and graduated from Henderson High School in 1970, and graduated from East Texas State University with a degree in Industrial Arts in 1974. He worked for Exxon as a Senior Instrument Technician and retired after 35 years. He continued working in the oil and gas industry until his passing. David married his beloved wife, Peggy on June 23, 1979 and enjoyed 42 wonderful years together. He was a faithful member of the Church of the Nazarene where he played guitar for the worship team every Sunday. David was skilled with his hands and crafted everything from wood carvings to custom knives. He adored his wife Peggy and his daughters Jacy and Laura. He was also a loving and delightful grandfather (PawPaw) to his seven grandchildren. He loved music, the great outdoors, and a good hamburger. David was a loyal friend and just a genuinely good man. He was preceded in death by his parents Billy and Nell Keeling, and his brother Mike Keeling. He is survived by his daughter Jacy Townsley and husband Chad Townsley, his daughter Laura Keeling, and his grandchildren – Laura Kate Townsley, Samuel Townsley, Atticus Townsley, Nave Klinger, Judge Klinger, Scout Keeling, and Jones Andrews. He is also survived by his sister Suzanne DeOrnellis and husband Terry DeOrnellis, nephew Tyler DeOrnellis, and nieces Sherlita Claburn and Louren Jones. Visitation for family and friends will be held on Sunday, August 29th from 3:00 to 5:00pm at Crawford- A. Crim Funeral Home. Funeral services will be held on Monday, August 30th at 4:00pm, also at Crawford-A. Crim Funeral Home. Pallbearers will be Alex Cary, Tyler DeOrnellis, Samuel Townsley, Atticus Townsley, Nave Klinger, and Judge Klinger. In lieu of flowers, David requested that donations be made to his church – Church of the Nazarene, PO Box 367, Henderson, TX 75653. Words of comfort may be shared with the family at www.crawfordacrim.com.

David Glen Keeling, age 69, passed away on Thursday, August 26, 2021. David was born December 12, 1951 to Billy and Nell Keeling in Overton, TX. He grew up in Henderson and graduated from Henderson High School in 1970, and graduated from... View Obituary & Service Information

The family of Mr. David Glen Keeling created this Life Tributes page to make it easy to share your memories.