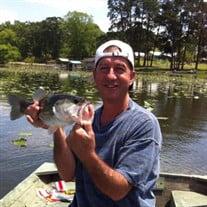 Graveside services for Mr. David Craig Harris, 58, of Mesquite, will be held at 2:00 p.m. on Saturday, November 7, 2020, at Waldrop Cemetery with Father Jay Lucas officiating. Interment will follow under the direction of Crawford-A. Crim Funeral Home. Mr. Harris passed from this life on October 23, 2020, at his residence in Mesquite. He was born April 2, 1962, in Gulfport, Mississippi and has lived in Mesquite for the last 25 years. He loved what he did for a living, owning and operating Super Dave’s Appliance Repair, and he loved his customers. They were always complimenting him on not only how great of a job he did but how friendly he was and how he was such a people person. Everyone, even outside of his customers, knew him as SUPER DAVE! Bowling or shooting pool was always an activity that he enjoyed with the family during the holidays. He eventually even got his own bowling ball and shoes! Dave’s favorite father-daughter date night spot was Uncle Julio’s. They would get the exact same thing every time and just enjoy catching up. Every time he would ask her to dinner, he would make sure she had more than an hour because he truly took his time and just enjoyed the food and company. He would even send pictures to his brother Paul to make him jealous! Whenever K.D. would ask him what he wanted for his birthday he would always say, “A Snickers!” because he did not want her buying him anything. Instead, he would rather spend time with loved ones. Dave also loved to fish, however, the thing he loved most in life was his family and friends. He was preceded in death by his son, Tyler Craig Harris; father, Donald Craig Harris; and grandparents, Celia Crocetta and Frank Crocetta, and Esther Craig Harris and Bryan Harris Survivors include his daughter, K.D. Harris Goodloe; mother, Margie Crocetta Harris; brothers, Neil Harris, Paul Harris, Richard Harris and Robert Harris; sisters, Jamie Harris and Barbara Harris Wise; nephews, Jackson Harris and Landon Harris; niece, Holly Harris; and a host of other family and friends. Words of comfort may be shared with the family at www.crawfordacrim.com.

Graveside services for Mr. David Craig Harris, 58, of Mesquite, will be held at 2:00 p.m. on Saturday, November 7, 2020, at Waldrop Cemetery with Father Jay Lucas officiating. Interment will follow under the direction of Crawford-A. Crim Funeral... View Obituary & Service Information

The family of Mr. David Craig Harris created this Life Tributes page to make it easy to share your memories.