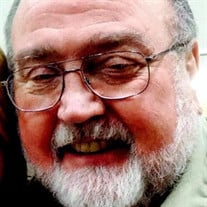 A celebration of the life of Mr. David Bassett, 79, of Laneville, will be held at 2:00 p.m. on Tuesday, November 30, 2021, at Southside Baptist Church with Rev. Blake Dover and Rev. Bill Gardner officiating, under the direction of Crawford-A. Crim Funeral Home. The family will receive friends from 6-8 p.m. on Monday, November 29, at the funeral home. Mr. Bassett passed from this life on November 22, 2021, at UT Health in Henderson. He was born January 20, 1942, in Houston to the late W.P. and Mattie (Goodlett) Bassett and spent most all of his life in Henderson. David graduated from Henderson High School and later completed his Bachelor's degree at Texas Baptist Institute. He furthered his education at Kilgore College and Stephen F. Austin State University. Mr. Bassett also proudly served his country in the United States Air Force. Early in his career, David was a radio announcer before surrendering to full time ministry. He retired from Parkway Baptist Church in Longview and later became a member of Southside Baptist Church in Henderson. During his ministry, Mr. Bassett preached the gospel, served as a music director, taught Sunday School and other classes, as well as provided counseling. He certainly had the spiritual gift of teaching. David also loved to read and studied constantly, and he was a wealth of knowledge. In addition to his parents, he was preceded in death by his sisters, Louise Warren and Doris Murphy. Survivors include his wife of 56 years, Tommie Bassett of Laneville; son, Harold Bassett and wife Wendy and their children Shellbee and Sydnee Bassett of Tyler; daughter, Melanie Tipps and husband Toby and their children Brittany Tipps and fiance Nick Henry, Jordan Tipps, and Clayton Tipps, Brad Tipps and wife Lacie and their children Kory and Kasen, all of Brachfield, and Callie Presley and husband Louis and their children Braylie and Tallyn of Henderson; very special friend, Randy Ainsworth and wife Tabatha and their son Hezekiah of Jacksonville; and a host of nieces, nephews, other family and many friends. Honorary pallbearers will be Randy Ainsworth, Todd Springfield, Tom Dumas, Rob Wells, Ronnie Threadgill, James Farnsworth, and Donald Hubbard. In lieu of flowers, memorial donations may be made to the Southside Baptist Church Library at 1801 Old Nacogdoches Rd., Henderson, TX 75654. Words of comfort may be shared with the family at www.crawfordacrim.com.

A celebration of the life of Mr. David Bassett, 79, of Laneville, will be held at 2:00 p.m. on Tuesday, November 30, 2021, at Southside Baptist Church with Rev. Blake Dover and Rev. Bill Gardner officiating, under the direction of Crawford-A.... View Obituary & Service Information

The family of Mr. David Bassett created this Life Tributes page to make it easy to share your memories.

A celebration of the life of Mr. David Bassett, 79, of Laneville,...