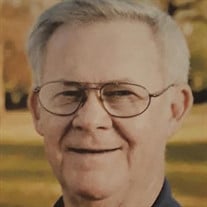 Funeral services for Mr. Dave “David” Rousseau, 88, of Brachfield, will be held at 2:00 p.m., Monday, September 6, 2021 at Zion Hill Missionary Baptist Church with Bro. Jimmy Simmons and Bro. David Gatlin officiating. Interment will follow at Zion Hill Cemetery under the direction of Crawford- A. Crim Funeral Home. The family will receive friends from 3:00 p.m. until 5:00 p.m., Sunday, September 5, 2021 at the funeral home. Mr. Rousseau passed from the life September 1, 2021, at UT Health in Henderson. He was born December 6, 1932 in Brachfield, TX to to the late Hall and Martha Elizabeth (Jones) Rousseau. Dave was an accountant for Foley’s department store in Houston for many years and then went on to work for Texas A&M Cultural Center in Overton for 15 years. He had a passion for Sacred Harp Singing and working as an Emcee for Bluegrass. He was a member of Zion Hill Missionary Baptist Church. In addition to his parents, he was preceded in death by wife, Nelly Rousseau; and sisters, Joyce Maples and Marion Grant. Survivors include, wife, Sherry Deason Rousseau of Brachfield; Sherrys children, David Wayne Vaughn of Alvarado, TX and Barbara and husband Lin Robinson of Lubbock, Tx; 3 grandchildren, Celeste, Jennifer, and Regina; 1 great-granddaughter, Penelope; and a host of nieces, nephews, family, and friends. Pallbearers will be Ben Wigand, Randy Griffith, Carlton Howeth, Calvin Hall, Rick Love, and Jeremy Simmons. Honorary pallbearers will be Rodney Deason, Cecil McGill, Lin Robinson, Lynn Welch, and David Vaughn. Words of comfort may be shared with the family at www.crawfordacrim.com.

The family of Mr. Dave "David" Rousseau created this Life Tributes page to make it easy to share your memories.