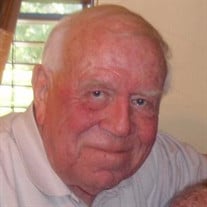 Funeral services for Mr. D. W. Barnett, 83, of Grand Prairie, formerly of Henderson, will be at 2:00 p.m., Saturday, April 20, 2019 at Crawford - A. Crim Funeral Home with Rev. Joe Orr officiating. Interment will follow at Strong Cemetery under the direction of Crawford - A. Crim Funeral Home of Henderson. A visitation will be held from 1-2 p.m. on Saturday at the funeral home. Mr. Barnett passed away Thursday, April 18, 2019 at UT Southwestern in Dallas. D.W was born in Honey Grove, Texas and moved to Henderson when he was a young boy. He graduated from Kilgore Junior College and then Stephen F. Austin University, and then worked as a Financial Controller with Campbell Soup and Pepperidge Farm his entire career. His favorite hobbies were fishing with his family and friends. He also enjoyed golf, but most of all he loved spending time with his family which was the highlight and biggest enjoyment in his life. Mr. Barnett was preceded in death by his beautiful wife and the love of his life, Sara Barnett. He is also preceded in death by his parents Woodrow and Mildred Barnett, his sister Patsy and brother Tommy and his uncle Mr. Sam Barnett. Survivors include his four children, Deana Darby and husband Steve of Hazel Green, Alabama, Sue Delaplaine and husband Chris of Grand Prairie, Texas, son Mike Barnett and wife Susan of Grapeland, Texas, and David Barnett and wife Jennifer of Aledo, Texas, sisters Joan Thomas and Kay Whitehead, seven grandchildren, Justin, Blake and Matt Barnett, Sarah Grubbs, Steven Darby, Camryn and Carsyn Barnett along with one great-granddaughter, Dallas Barnett, and six nieces and nephews in Texas along with 3 more nieces/nephews in Connecticut. Pallbearers will be Justin Barnett, Blake Barnett, Little Matt Barnett, Big Matt Barnett, Mike Ferguson and Paul Harris. Honorary pallbearers will be Donald Whitehead, Luke Whitehead, and Lem Thomas. Condolences may be made at www.crawfordacrim.com.

The family of Mr. D. W. Barnett created this Life Tributes page to make it easy to share your memories.