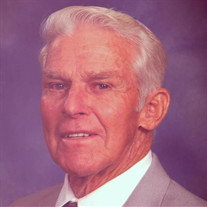 Funeral services for Connie Mack Dale Perryman, 86 of Henderson, will be held at 1:00 pm Saturday, July 6, 2019 at Crawford-A. Crim Funeral Home in Henderson, Texas. Interment will follow at Lakewood Memorial Park under the direction of Crawford-A. Crim Funeral Home. Family visitation will be 5-7 pm, Friday, July 5, at the funeral home. Mr. Perryman passed away on Tuesday, July 2 after a lengthy illness. He is preceded in death by his wife, Louven Day Perryman and survived by his daughter & son-in-law, Lea Anne and Dwayne Somerville of Mexia and three grandsons, Noah, Daniel and Micah Somerville and by his son & daughter-in-law, Scotty and Bernadette Perryman of Tyler and two step-grand-daughters, Claire & Sarah Wilkins. Connie Perryman was born June 3, 1933, the youngest of 14 children of John Ed and Mittie Perryman in the farming community of Dubberly, Louisiana. He graduated from high school in Minden, La. in 1952 and immediately shipped out for service with the U.S. Army. He served 2 years, including 14 months in Korea and was honorably discharged as a staff sergeant. Connie Mack, as he was known by his friends and family, returned home to a 32 year career with Marathon Oil Company which transferred him from Louisiana to the Price, Texas field office in 1970. After retiring from the oilfield he worked another two decades for the Gaston Water Supply Corporation and in recent years he had served with the maintenance department of Carlisle ISD. Mr. Perryman was an active member of First Baptist Church of Henderson and an avid supporter of the Henderson High School Band Booster Club. The family requests that memorials be made to Hospice of East Texas at 4111 University Blvd, Tyler, TX 75701. Words of comfort may be shared with the family at www.crawfordacrim.com.

Funeral services for Connie Mack Dale Perryman, 86 of Henderson, will be held at 1:00 pm Saturday, July 6, 2019 at Crawford-A. Crim Funeral Home in Henderson, Texas. Interment will follow at Lakewood Memorial Park under the direction of Crawford-A.... View Obituary & Service Information

The family of Mr. Connie Perryman created this Life Tributes page to make it easy to share your memories.