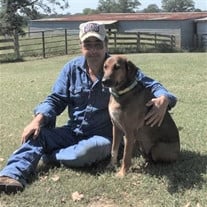 Bobby Clint Prior died on November 16, 2019 at the age of 58. Funeral services will be held at 10:00 a.m. on Tuesday, November 19, 2019, at Bar None Cowboy Church with Jason Taylor officiating. Interment will follow at Strong Cemetery under the direction of Crawford-A. Crim Funeral Home. The family will receive friends from 5-7 p.m. on Monday, November 18, at the funeral home. Clint was born February 6, 1961, in Henderson to the late Bobby Jack and Jenell (Keeling) Prior, and always called Henderson his home. He spent over 40 years with TXU and counted the men he worked with as family. He attended Bar None Cowboy Church and was a Master Mason and a member of Pine Hill Lodge #95 A.F. & A.M. Affectionately known as "Moose," his big heart and larger than life personality left few unaffected by his charm and his penchant for grand story-telling. Clint cherished his time with his wife Katy Prior, son Bobby Blake Prior, daughter Rachel Price, and grandchildren Carter and Ella Wheat, and Tripp Jackson. He was also close to his brother Luke Prior, sister-in-law Linda, nephews Branson and wife Christa, Daniel, and Max, and brother Larry Prior, sister-in-law Vickie, and nephews Shawn and Heath. His aunt, Ellie Ruth Glenn, also held a special place in his heart. Stories will never be quite as funny as when "Moose" told them, and life without him will certainly never be the same. Pallbearers will be Donald Mack Glenn, Ronald Jack Glenn, Dwayne Graham, Chris Bonner, Jerry Lee Wallace, and Blake Prior. Words of comfort may be shared with the family at www.crawfordacrim.com.

Bobby Clint Prior died on November 16, 2019 at the age of 58. Funeral services will be held at 10:00 a.m. on Tuesday, November 19, 2019, at Bar None Cowboy Church with Jason Taylor officiating. Interment will follow at Strong Cemetery under... View Obituary & Service Information

The family of Mr. Clint Prior created this Life Tributes page to make it easy to share your memories.