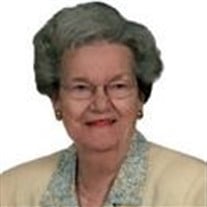 Clarine Murphy Brinkley, 95, a longtime resident of Andrews, passed away on January 9, 2018 in her current home of Waco, Texas. Graveside services will be held at 10AM on Friday, January 12, 2018 at Pleasant Hill Cemetery near Henderson, Texas, with Rev. Romnie Scott officiating, and close family attending. A visitation will be held on January 11 from 4PM to 6PM at Crawford - A. Crim Funeral Home. Clarine was born March 17, 1922, in New London, Texas. She was one of 12 children born to Willie Leland and Bettie Ollie Murphy. After growing up in Henderson, she attended Texas State College for Women in Denton (later became Texas Women’s University) with three of her sisters. After completing her bachelor’s degree in business, her first job took her to Shreveport, Louisiana, where she met the love of her life, Richard Lamar “Doc” Brinkley. Richard and Clarine were married on February 21, 1947 and celebrated 69 years together. The Brinkleys moved to Andrews in 1956 where they raised their daughters, Dianne and Connie. Clarine had a long career as a legal secretary working for the law firm of Ramsey, Barber and Smith, later working exclusively for Bob Barber and in later years for Ron Ragsdale. Clarine became so proficient with law, Ron Ragsdale declared her “the BEST lawyer in the history of Andrews County”. She was a member of the local chapter of the National Secretary’s Association. After retirement Clarine volunteered many years tutoring students for the Adult Literacy Program in Andrews. Clarine and Doc were active in local and national car clubs including the Antique Automobile Association of America. They were members of the CAF Desert Squadron in Odessa, Means Memorial United Methodist Church, and were active at the Andrews Senior Center. She was fascinated with the oil industry and lived in oil boom areas in East and West Texas. Clarine’s greatest enjoyments were time spent with family at reunions in East Texas, traveling, working crossword puzzles, stamp collecting and reading. Her travels, through car shows and planned vacations, included most of the U.S. states. International trips included a five country tour in Europe and Clarine kissed the Blarney Stone during a trip to Ireland to celebrate her & Doc’s 50th wedding anniversary. She is survived by her daughter Dianne and husband Brent deMoville of Waco, Texas; and daughter Connie and husband Randy Woertendyke of Southlake, Texas. Memorials may be sent to the Andrews Senior Center, 310 W Broadway St., Andrews, TX 79714, or the Means Memorial United Methodist Church, 311 NE 2nd Avenue, Andrews, TX 79714.

Clarine Murphy Brinkley, 95, a longtime resident of Andrews, passed away on January 9, 2018 in her current home of Waco, Texas. Graveside services will be held at 10AM on Friday, January 12, 2018 at Pleasant Hill Cemetery near Henderson, Texas,... View Obituary & Service Information

The family of Mrs. Clarine Murphy Brinkley created this Life Tributes page to make it easy to share your memories.