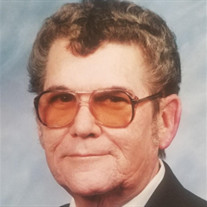 Funeral services for Mr. Clarence Raymond Reneau, 74, of Henderson, will be held at 10:00 a.m. on Saturday, June 1, 2019, in the chapel at Crawford-A. Crim Funeral Home with Bro. Danny Reneaux officiating. Interment will follow at Rusk County Memorial Gardens with Bro. Buddy Reneaux under the direction of Crawford-A. Crim Funeral Home. The family will receive friends from 6-8 p.m. on Friday, May 31, at the funeral home. Mr. Reneau passed from this life on May 29, 2019, at his residence in Henderson. He was born August 18, 1944, in Nacogdoches to the late Thomas and Frankie (Dews) Reneau. He had lived in Henderson for the last 45 years and was owner and operator of T&C Motors, selling used cars, and had previously worked for the Department of Agriculture for the state of California. Clarence was a people person, meeting and making new friends all the time. He loved his community and had a heart for service that led him to run for Rusk County Sheriff in the early 80's. He was also a charter member of the Sunset Lions Club. Clarence loved to have fun. His competitive spirit made for many exciting games of pool, cards, and darts, just to name a few. He enjoyed antiquing and going to garage sales where he would find things to restore with his family. Clarence was a talented man with a natural ability for music, and he loved to sing and play guitar. He dearly loved his children and grandchildren, and his musical talent inspired a love for music among his children. Most of all, Clarence was a man of faith, attended church regularly, and encouraged others in that faith. In addition to his parents, he was preceded in death by his brother Joe Reneau, and sister-in-law Linda Reneaux. Survivors include his sons Scott Reneau of Henderson, Sonny Reneau of Nashville, TN, Gary Reneau of Dallas, Cary Reneau and wife Valerie of Spring, and Robert Patillo and wife Nancy of San Antonio, daughter Chrissy Lugo and husband Manuel of Midland, brother Buddy Reneaux of Henderson, sister Shirley Reneau Wills of Tatum, grandchildren Thomas, Katie, Lily, Chloe, Desmond, Delilah, Farrah, Noah, Adam, and Victoria, six great-grandchildren, and a host of nieces, nephews, family and friends. Pallbearers will be Joe Reneau, Roger Reneau, Eric Reneaux, Thomas Reneau, Larry McConnell, Don "Bubba" Prior, and Vernon "Elvis" Dean. Words of comfort may be shared with the family at www.crawfordacrim.com.

Funeral services for Mr. Clarence Raymond Reneau, 74, of Henderson, will be held at 10:00 a.m. on Saturday, June 1, 2019, in the chapel at Crawford-A. Crim Funeral Home with Bro. Danny Reneaux officiating. Interment will follow at Rusk County... View Obituary & Service Information

The family of Mr. Clarence Raymond Reneau created this Life Tributes page to make it easy to share your memories.