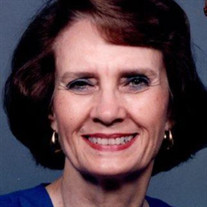 Funeral services for Mrs. Clara Hall Oldham, 93, of Henderson, will be held at 2:00 p.m. on Monday, March 8, 2021, in the chapel at Crawford-A. Crim Funeral Home with Rev. Margaret Story officiating. Interment will follow at Rusk County Memorial Gardens under the direction of Crawford-A. Crim Funeral Home. The family will receive friends from 5-7 p.m. on Sunday, March 7, at the funeral home. Due to the current COVID-19 pandemic, masks or face coverings are strongly recommended, however not required, for the health and safety of all those in attendance for a visitation or service. Mrs. Oldham passed from this life on March 3, 2021, at Brookdale of Henderson. She was born December 26, 1927, and was raised in Henderson. Clara moved from Henderson in 1952 and lived in several places in Texas, including Amarillo and Weatherford, before settling back in Longview nearly 20 years ago. Mrs. Oldham received her PhD from the University of Texas at Austin and was later an educator and taught in the Dental Hygiene program at Amarillo College where she later served as Dean. Mrs. Oldham was an avid reader and life-long learner. She never stopped learning in her 93 years. She enjoyed studying Kay Arthur Precept courses and was a member of Mobberly Baptist Church in Longview where she also taught Sunday School classes. Clara truly enjoyed spiritual instruction and Bible studies. She was preceded in death by her father, Jones Wilder; mother, Ruby Wilder Gessel; son, Jerry Glen Hall; husband, Jim Oldham; and brothers, J.W. Wilder and Bill Wilder. Survivors include her children, Sharon Escue and husband Roland of San Antonio, Louis Hall and wife Mary of Henderson, and James Hall and wife Clara of Ft. Worth; brother, Odis Wilder and wife Vivian of Lafayette, Louisiana; grandchildren, Timothy Hall, Ashley Smith, Evan Hall, Marci Davis, and Todd Davis; great-grandchildren, Cadence Hall, Lauren Davis, and Libby Davis; and a host of nieces, nephews, other family and friends. Pallbearers will be Daniel Smith, Timothy Hall, Mark Wilder, Joe Wilder, Jay Wilder, and Kelly Hall. Words of comfort may be shared with the family at www.crawfordacrim.com.

The family of Mrs. Clara Hall Oldham created this Life Tributes page to make it easy to share your memories.