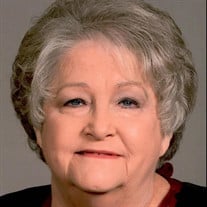 Funeral services for Mrs. Christine Brunk Bennett, 73, of Henderson, will be held at 2:00 p.m. on Saturday, October 17, 2020, at First Baptist Church with Dr. David Higgs officiating. Interment will follow at Rusk County Memorial Gardens under the direction of Crawford-A. Crim Funeral Home. The family will receive friends from 1:00 p.m. until service time on Saturday at the church. Mrs. Bennett passed from this life on October 13, 2020, at UT Health in Tyler. She was born March 28, 1947, in London, England to the late Bailey and Sadie Brunk during Bailey’s service in the military. Christine was raised in Cayuga before moving to Henderson during her freshman year of high school. She graduated from Henderson High School in 1965 and went on to Kilgore College. Mrs. Bennett worked for a short time for Turlington Realty before devoting her time and attention at home as a homemaker. Christine, or “Mimi” as she was known by her grandchildren and many friends, was a model wife, mother, and grandmother. She spent many hours at the school volunteering long after her children had graduated. She just loved people and had a heart for serving others. Mimi loved to travel to watch her grandchildren participate in school activities, and she rarely missed her weekly lunch with “the girls.” Mrs. Bennett was also a long-time member of First Baptist Church of Henderson. In addition to her parents, she was preceded in death by her husband, Stanley Bennett. Survivors include her son, Jeff Bennett and wife Madeline of Arlington; daughter, Holly Coleman and husband Lawrence of Henderson; brother, Barry Brunk of Ennis; sister, Sally Kelsey and husband Jerry of Henderson; sister-in-law, Darlene Chapman of Henderson; grandchildren, Brackton Bennett of Nacogdoches and Ashlynn Bennett of Lubbock, and Emma and Bailey Coleman of Henderson; as well as a host of nieces, nephews, other family, and many friends. Pallbearers will be Barry Brunk Jr., Greg Chapman, Brandon Chapman, Kevin Snyder, Micah Snyder and Randy Cook. Pallbearers will be Barry Brunck Jr., Greg Chapman, Brandon Chapman, Kevin Snyder, Micah Snider, and Randy Cook. Honorary pallbearers will be her many, many friends. In lieu of flowers, memorial donations may be made to the First Baptist Church Children’s Building Fund or the Rusk County Legacy House, both at 207 W. Main St., Henderson, TX 75652. Words of comfort may be shared with the family at www.crawfordacrim.com.

The family of Mrs. Christine Brunk Bennett created this Life Tributes page to make it easy to share your memories.