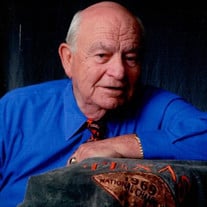 Funeral services for Mr. Charles William "Charlie" White, 87, of Henderson, will be held at 2:00 p.m. on Monday, June 22, 2020, in the chapel at Crawford-A. Crim Funeral Home with Dr. David Higgs and Richard Smith officiating. Interment will follow at Rusk County Memorial Gardens under the direction of Crawford-A. Crim Funeral Home. The family will receive friends from 3:00 p.m. to 5:00 p.m. Sunday, June 21, 2020 at the funeral home. Mr. White passed from this life on June 18, 2020, at UT Health in Tyler. He was born May 18, 1933, in Pine Hill to the late Jack and Eula (Bearden) White. Charlie, also known to friends and family as "Sonny" or "Shorty", graduated from Henderson High School and went on to attend the University of Texas at Austin. Sonny was a die hard Longhorn fan, maybe the biggest there was. He also served his country in the United States Army during the Korean Conflict. After his military service, Shorty moved to Austin in 1958 and had a 26 year career as a truck driver with Central Freight Lines. He had also previously worked as a pharmacy tech and delivered milk. Upon his retirement, Mr. White moved back home to Henderson where he was a member, and attended, First Baptist Church. In addition to his parents, he was preceded in death by a brother, Kenneth White. Survivors include his children, David White of Henderson, James White and wife Daisy of Panama City, Florida, Sarah L. Lewis and husband Marvin of Arvada, Colorado, and Paul White and wife Deanna of Pollok; siblings, Peggy Hutchens of La Porte, and Joe White and wife Ann of Kilgore; grandchildren, Shauna Ellis, Kristy White, Joshua White, Jacob White, Rick Lewis, Amanda Lewis, Alex White, Destiny Monroy, and Justin White; 7 great-grandchildren; and a host of nieces, nephews, other family and friends. Pallbearers will be David White, James White, Paul White, Marvin Lewis, Kristy White, and Josh Ellis. Honorary pallbearer will be Kevin Stevens. Words of comfort may be shared with the family at www.crawfordacrim.com.

Funeral services for Mr. Charles William "Charlie" White, 87, of Henderson, will be held at 2:00 p.m. on Monday, June 22, 2020, in the chapel at Crawford-A. Crim Funeral Home with Dr. David Higgs and Richard Smith officiating. Interment will... View Obituary & Service Information

The family of Mr. Charles William "Charlie" White created this Life Tributes page to make it easy to share your memories.