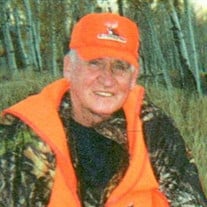 Funeral services for Mr. Charles W. Strong, 84, of the Church Hill community, will be at 10:00 a.m., Saturday, Nov. 2, 2019 at the Church Hill United Methodist Church. Interment will follow at Strong Cemetery under the direction of Crawford - A. Crim Funeral Home of Henderson. Visitation will be from 6 - 8 p.m., Friday, Nov. 1, 2019 at the funeral home. My precious Charles left our earthly home and was embraced by his Lord and Savior at 7:33 A.M., October 29, at Christus Good Shepherd in Longview, Texas. Born on January 10, 1935, Charles was the eighth and last baby child born to Emmett and Grace Strong of the Church Hill community. His parents and all of his brothers and sisters preceded him to heaven. As a young boy, Charles had already developed a love of the outdoors and helped his daddy with the bee colonies from which his dad made honey that was sold in the store. This was not his favorite job, and he detested bees forever more. Charles attended school in the Church Hill school until the school burned at which time he transferred to the Henderson Independent School District. He played on the varsity basket-ball team and was named several times to the all-district teams. While playing basket-ball, he was dubbed with the nick-name of "Chicken Strong" because of his long slender legs and he carried that name forever. Upon graduation, he was offered several basket-ball scholarships but opted to begin his working career with Hudson Engineering and later transferred to Texas Eastman where he retired after 36 years of service. Charles loved to fish on Red River with friends and family. His favorite trip was the last one he made with son Stephen and very dear friend John Walker. He was also an excellent deer hunter and hunted for over fifty years with his childhood friend Ed Perry. Together they killed the first deer in the Church Hill area. After Ed preceded Charles to heaven, he lost his interest in this sport and often said, "It was not the same without Ed." Until he was physically unable, every spring and fall we would find Charles in the middle of the road on his John Deere to break up garden plots for his neighbors, and family. Charles was an active member of the Church Hill Methodist Church for over seventy years. He was an excellent Sunday School teacher for over fifty years and served that same amount of time as Lay Leader of the congregation. As his wife Nancy, I survive Charles and son, Stephen Wesley Strong and wife Stacey and daughter Stevie Bre. Also surviving Charles are Stacey's sons, Andrew Barber, and Tyson Barber, and family. My children surviving are Lauri Jill Gimpel, Mr. and Mrs. Kenny Bassinger and children Haley, Grant, and Colin, Mr. and Mrs. Jason McNally and children Baleigh Wren, Eden Elizabeth, and Phoebe Lou (my namesake). He is also survived by a host of the most wonderful nieces and nephews that God ever made. Serving as pallbearers are, Jason McNally, Tommy Strong, Mark Strong, Mark Perry, Hunter Perry, Michael Perry, John Walker, and Tim Ashmore. Serving as honorary pallbearers are Vicky Walker, Myra Smith, Perry and Jo Ann Terry, Bob and Lake Woodruff, Dean Centers, Jon Best, my bridge clubs, my volunteer groups and the wonderful members of the Church Hill United Methodist Church. If you choose to give a remembrance for Charles , I know he would be so pleased to know that a donation was given in his name to the Methodist Children's Home, 921 Shiloh Rd B300, Tyler, TX 75703, or to the Church Hill United Methodist Church 8103 FM 1251 Henderson, Tx. 75652. Charles always said he would go before me and build us a log cabin and he and our dog Sabrina would be waiting for me on the front porch. I await that day. I covet your prayer as I try to transition my life to living without this wonderful man. Condolences may be made at www. crawfordacrim.com.

Funeral services for Mr. Charles W. Strong, 84, of the Church Hill community, will be at 10:00 a.m., Saturday, Nov. 2, 2019 at the Church Hill United Methodist Church. Interment will follow at Strong Cemetery under the direction of Crawford... View Obituary & Service Information

The family of Mr. Charles W. Strong created this Life Tributes page to make it easy to share your memories.

Funeral services for Mr. Charles W. Strong, 84, of the Church...