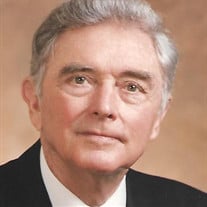 Mr. Charles Hepburn Richardson, 97, of Henderson, passed away Friday, August 2, 2019, at his residence. A visitation will be held from 5:00-7:00 p.m., Tuesday, August 6, 2019, at Crawford - A. Crim Funeral Home. A Burial Eucharist to celebrate Charlie's life will be held privately at St. Matthew's Episcopal Church for the Richardson/Dismukes families, St. Matthew's family and close friends at 2 p.m. on Wednesday, August 7,under the direction of Crawford-A. Crim Funeral Home. A reception will follow in the Parish Hall. Mr. Richardson was born August 20, 1921 in Baton Rouge, LA to Charles Adam and Marjorie Hepburn Richardson. A graduate of Baton Rouge High School, Charlie attended Louisiana State University before enlisting in the United States army Air Corps, in which he served as a pilot during World War II. When he returned from overseas, Charlie married Reube Gene Shaw in Henderson, TX on November 13, 1944. They spent their first year of Marriage in the Army Air Corps. After being discharged from the Air Corps, Charlie completed his degree in Mechanical Engineering at Louisiana State University in Baton Rouge. The Richardson's then made their home in many places as Charlie pursued his career with Gulf Oil. Gene and Charlie moved back to Henderson in 1952 where Charlie managed family property and taught in the Engineering Department at Kilgore College until 1977. Charlie served for many years as a director on the board of several local civic and private organizations, including Henderson Memorial Hospital, Henderson Federal Savings and Loan, Citizens National Bank, and the Kilgore College Foundation. He was a longtime member of the Kiwanis Club. Charlie was one of the founders of the Youth Expo Center in Henderson. He and Gene particularly enjoyed helping local youth by providing academic scholarships for graduates of Henderson High School. They also took great joy in establishing the Charles F. Richardson International Studies Scholarship Program at Austin College in Sherman, TX. Charlie was a devoted member of St. Matthew's Episcopal Church where he served through the years as a lay reader and as a Sunday School teacher. Charlie and Gene loved their family and friends. They were known for sharing their hospitality at their home in Henderson as well as at their Colorado condominiums, first in Breckenridge and later in Steamboat Springs. Charlie was an avid skier and was known for sharing his love of the sport by introducing it to all who dared to follow him on whatever mountain he happened to be exploring at the time. In addition, he loved to travel, go to the horse races and to ballroom dance with Gene. Charlie was blessed to be assisted by his friends Vera Johnson and Rick Wilson who worked for the Richardson's for many years. In addition to his parents, he was preceded in death by his wife, Gene Richardson; son, Charles F. Richardson; brother, Parry Richardson and his wife Betty; and sister, Janet Dixon and her husband Lou. He is survived by his daughter, Elizabeth Richardson Dismukes of Henderson; grandchildren, Rebecca Dismukes of Denton, Robert Dismukes of Corpus Christi, Regan Linz and her husband Josh of Austin; great-grandchildren, Katherin, Robert Jr., and Dale Dismukes; sister, Marjorie Montgomery of Baton Rouge; and numerous nieces, nephews, other family, and friends. Honorary pallbearers are Joe Wylie, Robert Dismukes, Rick Wilson, Johnny Kangerga, David Alford, Johnny Johnson, Bill Preston, Gyce Butler, and Mike Patton. In lieu of flowers, the family requests that donations be made to St. Matthew's Episcopal Church, 214 College Avenue, Henderson, Texas 75654 or to the charity of your choice. Condolences may be made at www.crawfordacrim.com.

The family of Mr. Charles Hepburn Richardson created this Life Tributes page to make it easy to share your memories.