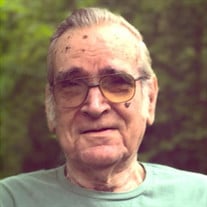 Graveside services for Mr. Charles L. Gentry, 75, of Lakeport, will be held at 10:00 a.m. on Tuesday, January 30, 2018, at Zion Hill Cemetery with Dr. Ron Gentry officiating. Interment will follow under the direction of Crawford-A. Crim Funeral Home. The family will receive friends from 5-7 p.m. on Monday, January 29, at the funeral home. Mr. Gentry passed from this life on January 28, 2018, at his residence in Lakeport. He was born August 13, 1942, in Rusk County and was raised in the Baptist faith. Charles has called Lakeport home the last 10 years and previously resided in Richwood. He retired as an operator for Dow Chemical after 36 years of faithful service. Charles was a man of many interests, chief among them was ancestry and his "kin folks." He also enjoyed fishing and piddlin' around the yard. He was a very organized man and was good at archiving information, photos, or whatever he thought needed putting in it's proper place. He also had a thirst for knowledge that led him to know his way around a computer quite well. He was preceded in death by his father Linas Gentry, mother Mildred Ellington, daughter Debra Jean Hoskins, grandson Ronnie Gentry Jr., and brother Orlen "Tex" Gentry. Survivors include his wife of 32 years Bobbie Jean Gentry of Lakeport, son Dr. Ron Gentry and wife Magon of Angleton, step-son David Wells of Ft. Worth, step-daughter Rhonda Jean Freeman and husband Gary of Silsbee, brother Dale Gentry and wife Sue of Lindale, sister Iva Nell McNeil and husband Freddie of Daingerfield, and numerous grandchildren, great-grandchildren, and other family and friends. Words of comfort may be shared with the family at www.crawfordacrim.com.

Graveside services for Mr. Charles L. Gentry, 75, of Lakeport, will be held at 10:00 a.m. on Tuesday, January 30, 2018, at Zion Hill Cemetery with Dr. Ron Gentry officiating. Interment will follow under the direction of Crawford-A. Crim Funeral... View Obituary & Service Information

The family of Mr. Charles L. Gentry created this Life Tributes page to make it easy to share your memories.