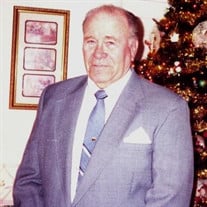 The Lord called Charlie to his heavenly home on June 11, 2019, after a time of resting at Marian Place in Carthage, where he was loved by all the staff and caregivers. Funeral services for Mr. Brown, 88, of Henderson, will be at 10:00 a.m., Saturday, June 15, 2019 at St. Jude's Catholic Church in Henderson with Father Steven G. Paradis officiating. Interment will follow at 3:00 p.m., Saturday, June 15, 2019 at Fellowship Cemetery in N. Hodge, Louisiana under the direction of Crawford - A. Crim Funeral Home of Henderson. Visitation will be from 6:00 - 7:00 p.m., Friday, June 14, 2019 at the funeral home, with a Rosary from 7:00 - 8:00 p.m. Charlie was born March 17, 1931 in Shreveport, LA to the late Aubrey and Alieen Brown. Charlie served his country in the Army Air Corps, joining at age 15, serving from 1946-1949 as an Airplane Engine Mechanic, and was stationed at Okinawa in 1947. At age 22 he went to work for Otis Elevator and was also became a lifelong member of the International Brotherhood of Elevator Workers, Union Hall #31. During his time with Otis Elevators, he placed elevators in the San Jacinto Monument, and also in the Humble building, one of the tallest in the United States. He also worked on buildings around Houston, including the Astrodome. During all this work with the elevators, he was also a long-haul truck driver. He was a member of St. Jude's Catholic Church in Henderson. After his beloved wife's death, he filled his time with his family, visiting his daughter, grandchildren, and great-grandchildren just about every day. He always bought them a special treat. When he wasn't spending time with his family, he was driving through the states to place his bets on his favorite pool players, where he became known as the "Calcutta King." He knew and travelled with the Best Pool players in the world, from the Philippines to England and to Canada. Charlie had a charismatic and electric personality, which made him liked and loved by everyone who knew him. In addition to his parents, he was preceded in death by his wife, Dorothy Marie Brown in 2005; and brother, Jack Brown. Survivors include: one daughter, Karen "Kay" Murray and husband Larry of Henderson; one son, Judge Tommy Wilson, Jr. and wife Patsy of Bossier City, LA; grandchildren, Lari Murray of Henderson, and Angela Taczek and husband Tony of Tatum, Selitha Turner and husband John, Alyson Wilson, and Trey Wilson III, all of Bossier City, LA; great-grandchildren, Aedyn Taczek, Trace Taczek, Lockey McKinney, David Taczek, Trenton Turner, and Kade Wilson; sister, Jean Horton of Bethany, and brother, Wayne Brown of Conroe. Pallbearers are Tommy Wilson, Floyd Miles, Jr., Tony Taczek, Eddie Morgan, Ed Hoss, and John Turner. Honorary pallbearers are Trace Taczek, Trenton Turner, and Trey Wilson. Condolences may be made at www.crawfordacrim.com.

The Lord called Charlie to his heavenly home on June 11, 2019, after a time of resting at Marian Place in Carthage, where he was loved by all the staff and caregivers. Funeral services for Mr. Brown, 88, of Henderson, will be at 10:00 a.m.,... View Obituary & Service Information

The family of Mr. Charles "Charlie" Brown created this Life Tributes page to make it easy to share your memories.