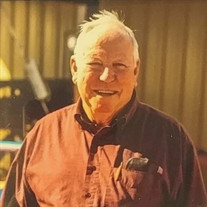 Funeral services for Mr. Charles Benny Marsh, 78, of Carlisle, will be held at 2:00 PM on Saturday, December 7, 2019, in the chapel at Crawford-A. Crim Funeral Home with Rev. Nathan Briggs and Pastor David Goodwin officiating. Interment will follow at Blackjack Cemetery under the direction of Crawford-A. Crim Funeral Home. The family will receive friends from 6-8 PM on Friday, December 6, at the funeral home. Mr. Marsh was born January 20, 1941, in the Henry's Chapel Community to the late David and Lucille Marsh. He passed from this life on December 5, 2019, at his residence. In addition to his parents, Charles was preceded in death by his wife, Sandra Arrington Marsh; sisters, Mildred Rager of Duncanville and Virginia Coombs of Troup; brother, Jerrill Marsh of Troup; and brother-in-law, Larry Arrington of Winnsboro. He is survived by his sons, Michael Marsh and wife Anita of Troup and Marc Marsh and wife Ashley of Carlisle; daughter, Michelle Moore and husband William of Kemp; his loving friend and caregiver, Bernice Worley of Troup; 8 grandchildren and 10 great-grandchildren; brother, Odis Marsh and wife Frankie of Pittsburg; sister, Ruth Waits of Granbury; sisters-in-law, Pat Marsh of Troup and Carolyn Weems of Winnsboro; brothers-in-law, Ron Arrington and wife Frances of Pittsburg, Billy Rex Arrington and wife Patty, Jet Arrington and wife Linda, and David Arrington and wife Janet, all of Winnsboro; as well as many cousins, nieces, nephews and uncountable friends. Charles attended 1st grade at Carlisle Schools, his family moved to Dallas and he continued his education there, finally attending both South Oak Cliff and Garland High Schools. He then began working as a store manager for Buddies Supermarkets at various Dallas area stores and later worked as a plumber in the Dallas area before returning to Carlisle in 1975. At that time he started Marsh Plumbing with his brother Jerrill and they worked all over the East Texas area in both plumbing and air conditioning. Following the plumbing business, Charles continued his working career as a Rural Carrier with the U.S. Postal Service, a position he held for 12 years before retiring in 2003. After moving back to Carlisle, Charles returned to and became active in his home church, Carlisle United Methodist Church, where he was a lifetime member and remained devoted to the church until his death. He also became an active member of the Carlisle Volunteer Fire Department and remained so for 42 years, last serving as chief until January 2019. He was also a dedicated paramedic and first responder for Carlisle VFD and Rusk County for over 35 years. In addition, Charles was a member of the Price Water Supply Board of Directors, serving various positions, finally as their Secretary. He also served as a member of the Rusk County Tax Appraisal Review Board for about 20 years. Charles was always ready and willing to help anyone and he did so with compassion, dedication, and love for his fellow man and the community he lived in. He will be greatly missed by family, friends, and the community. Those who knew him will always remember his sense of humor and the fact that he was always ready to tell or hear a good joke. Although he only attended school in Carlisle briefly, Charles was a strong supporter of the Carlisle Alumni Association and sports teams. He dearly loved watching the Carlisle Indians play football and baseball and attended games regularly. Pallbearers will be Jerrill Marsh Jr., David Marsh, Joe Marsh, Ronald Arrington, Billy Rex Arrington, and David Arrington. Honorary pallbearers will be Don Marsh, Ron Marsh, Dennis Jordan, Jimmy Broome, Jet Arrington, Gary Sewell, Shakeel Kahn, and members of the Carlisle Volunteer Fire Dept. In lieu of flowers, memorials may be made to Carlisle United Methodist Church at PO Box 155, Price, TX 75687. Words of comfort may be shared with the family at www.crawfordacrim.com.

Funeral services for Mr. Charles Benny Marsh, 78, of Carlisle, will be held at 2:00 PM on Saturday, December 7, 2019, in the chapel at Crawford-A. Crim Funeral Home with Rev. Nathan Briggs and Pastor David Goodwin officiating. Interment will... View Obituary & Service Information

The family of Mr. Charles Benny Marsh created this Life Tributes page to make it easy to share your memories.