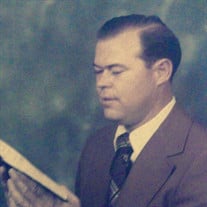 Funeral services for Rev. Charles F. Baldwin, 71, of Henderson, will be held at 10:00 a.m. on Monday, April 23, 2018, at First United Pentecostal Church with Rev. Bill Clayton and Rev. Bailey Alders officiating. Interment will follow at Duncan Cemetery under the direction of Crawford-A. Crim Funeral Home. The family will receive friends from 5-7 p.m. on Sunday, April 22, at the funeral home. Rev. Baldwin passed from this life on April 19, 2018, at ETMC in Henderson. He was born August 12, 1946, in Gonzales to the late Daniel and Mildred (McVea) Baldwin and has resided in Henderson since 1986. After high school, Charles proudly served his country in the United States Army during the Vietnam War. He was an intelligent man with an excellent memory, and he loved to make people laugh. Charles was a hard working man and enjoyed time outdoors working in his yard. Rev. Baldwin spent most all of his life in the ministry, pastoring over 21 years at First United Pentecostal Church in Henderson. He then served Liberty Pentecostal Church where he still ministered the Gospel. In addition to his parents, he was preceded in death by his sister Elizabeth Oliver, niece Crystal Oliver, nephew Jeffery Oliver, and his step-mother Pauline Baldwin. Survivors include his wife of over 50 years Linda Baldwin of Henderson, son Rev. Charles L. Baldwin of Henderson and his children Andrew, Jared, and Jeremiah Baldwin, daughter Dana Simmons and husband Daniel of Peoria, Arizona and their daughter Sheridan Sharp and her fiancé Reese Stroud, daughter Cara Luman of Lewisville and her children Madison, Landon and Luke Luman and Ethan Luman and his family Kalyn Eaves with great-grandbaby Kagan Luman, sister Linda Netherland and husband Gary of Madison, Mississippi, and a host of nieces, nephews, other family and friends. Pallbearers will be Andrew Baldwin, Jared Baldwin, Jeremiah Baldwin, Ethan Luman, Landon Luman, and Luke Luman. Words of comfort may be shared with the family at www.crawfordacrim.com.

The family of Rev. Charles F. Baldwin created this Life Tributes page to make it easy to share your memories.