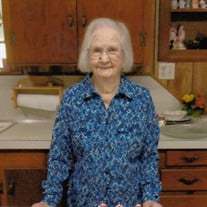 Funeral services for Mrs. Carrie Opal Chamberlain Sellers, 106, of Henderson will be held at 10:00 a.m., on Friday, January 21, 2022, in the chapel at Crawford-A. Crim Funeral Home with Dr. Robert Wells officiating. Interment will follow at New Salem Cemetery under the direction of Crawford-A. Crim Funeral Home. The family will receive friends from 5:00 p.m. to 7:00 p.m. Thursday, January 20, 2022 at the funeral home. On January 16, 2022 at the age of 106, Carrie Chamberlain Sellers, of Henderson, went home to be with her Lord and Savior. Carrie Opal Chamberlain was born at her home in Emmaus, Texas (close to New Summerfield in Cherokee County) on March 20, 1915 to Miles Anderson and Ruth Elizabeth Nichols Chamberlain. Her siblings included: Herbert Chamberlain, Buna C. Compton, Minnie Chamberlain, Carl Chamberlain, Hayward Chamberlain, Mozelle C. Christie, and C.L. Chamberlain. When she was about 11 years old, the family moved to the McKnight Community in Rusk County. She remained in the county the rest of her life and lived in New Salem, Laneville, Brachfield, Crims Chapel, and Henderson. Carrie was proud of her Christian heritage. “I was raised up to attend church, regular, and my parents were good Christians that loved us and taught us to love the Lord first and then love each other. And to love our neighbors as ourselves and to always treat others like we wanted to be treated.” Carrie had an amazing memory and was especially good at recalling names. She could still remember the names of the two girls who taunted her when she was in the first grade—more than 99 years ago! She even remembered the names of the landlords and their family members from many of the different homes she lived in through the years. She was awarded a Bible for winning a Bible verse memory contest when she was a child and she could still quote Psalm 23 when she was 105 years old. She loved to tell stories from her childhood. “I can remember when we use to go to church, and the only way we had to travel was by wagon and team. My oldest sister and three oldest brothers would sit in the back of the wagon and hang their feet down. But me and my other sister and brother had to sit flat down on quilts in the flat bed.” Many of her stories have been compiled in a booklet “Playin’ in the Creek.” On June 13, 1931, Carrie married S T Sellers. He promised her that if she married him, she would never have to work in the cotton fields again. (And she never did!) They had three children: Virgil, Reasie Mae, and Joe. Carrie accepted Jesus as her Savior and became a Christian after she married, and was baptized by the New Salem Baptist Church. At the time of her death, she was a long-time member of Southside Baptist Church in Henderson. Years ago, she worked part-time at Ray’s Pharmacy and Haden-Brown Drug Store. Carrie was blessed to be able to live at home with the help of attendants and distant relatives. She was spunky and determined. She endured trials with courage and did not give in to despair. She often commented that she didn’t understand why the Lord allowed some things to happen, but she didn’t question Him. She knew that God provided for her. She was truly inspiring to those around her. Carrie was preceded in death by her parents, her husband of 60 years, her children, and all of her siblings. She spoke often of her family and greatly missed them. She is survived by numerous descendants. Thanks to her long-time deacon, Dr. Rob Wells, who checked on her regularly for years and to her church, Southside Baptist, who met her needs. Also, thanks to Oscar Guevara and his family who took care of her yard for many years. A special thanks to Dr. Walgama—Carrie was very pleased with the care and attention he gave her. Thanks to the team of therapists and nurses from Assist Care, especially Kristin Barnhart, Lara Hightower, Ruth Hunt, and Andrea Zivney. Carrie was very thankful to all those relatives who made it possible for her to live at home for the last four years including: Linda Burks; Mercedes and Haylee Burks; Tasha and Olivia Fraser; Mike and Sharon Rollins; Alice, Lindsey, and Alan Aten; Carma Ferguson; Esther and Rachel Bunn; Debra Nichols; Sara Randall; and Barbara Bates. Also, helping were her friends Barbara Cooper, Anita Pinkerton, and Shana Moland, as well as her attendants, Sarah Jones, Lulu Lara, Teleder Leatch, Olivia McGee, Ruthanne Moland, Renee Moseley, Kristen Pool, and Lois Windom. Pallbearers will be Alan Aten, Sammy Bates, Dalin Burks, Joel Fraser, Oscar Guevara, and Mike Rollins. Words of comfort may be shared with the family at www.crawfordacrim.com.

Funeral services for Mrs. Carrie Opal Chamberlain Sellers, 106, of Henderson will be held at 10:00 a.m., on Friday, January 21, 2022, in the chapel at Crawford-A. Crim Funeral Home with Dr. Robert Wells officiating. Interment will follow at... View Obituary & Service Information

The family of Mrs. Carrie Opal Chamberlain Sellers created this Life Tributes page to make it easy to share your memories.