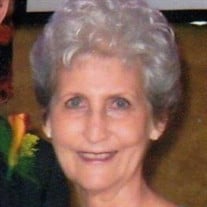 Graveside services for Mrs. Carolyn Miller Delk Champion, 86, formerly of Luling, Louisiana, will be held at 12:00 p.m. on Saturday, September 25, 2021, at Resthaven Memorial Gardens in El Dorado, Arkansas. Interment will follow under the direction of Crawford-A. Crim Funeral Home. Mrs. Champion went to be with her Lord on September 21, 2021, at her home in Cushing, Texas surrounded by her loving family. She was born March 9, 1935, in El Dorado, Arkansas to the late Carl P. and Versa Lee (Jackson) Miller. She was raised in El Dorado, graduating from El Dorado High School in 1953, and later spent most of her life in Luling, Louisiana before moving to Cushing, Texas in the spring of 2020. Mrs. Champion was a homemaker and also held the position of Financial Secretary for First Baptist Church in Luling, Louisiana. She was a charter member of the church and served as church organist for over 55 years. Carolyn also served as a secretary for Union Carbide Chemical Plant. Carolyn enjoyed doting on her family and traveling. She was a master seamstress who loved to cross stitch and made the best banana pudding in the world. Mrs. Champion was without a doubt a loving wife, mother, grandmother and great-grandmother, and friend to all. Most importantly, she cherished her faith and demonstrated it. She had the patience of a saint and was a true woman of God. In addition to her parents, she was preceded in death by her husband of 55 years, Edward Kenneth Delk; daughter-in-law, Lorraine Borne Delk; and son-in-law, Quentin Sterling Burnett. Survivors include her husband of 12 years, Ross L. Champion. She was the loving mother to Stephan Louis Delk and Amy Delk Burnett. Her grandchildren include Jennifer Delk Lambert and husband Ched and their children Drake Lambert, Dior Lambert, and Drycen Lambert; Hollie Delk Mule’ and husband Dustin and their children Hunter Mule’ and Hayden Mule’; Kimberly Wiginton Gamboa and husband Joshua and their daughter Makayla Jo Gamboa; and Michael Clay Wiginton. In addition to her own children and grandchildren, Mrs. Champion is survived by Ross’ children, Marcia Champion Newton and husband Jesse, Amy Champion Ivanhoe and husband Lee, Theresa Champion Discavage and husband Tom, and Lisa Champion Wright and husband Patrick, along with their families; as well as a host of cousins, other family, and many friends. If desired, memorial contributions may be made to Heartsway Hospice of Northeast Texas at PO Box 5608, Longview, TX 75608 or heartswayhospice.org. The family would like to express their sincere gratitude to nurses and caregivers Amy, Angela, Shelby, Bobbie, and Tiffany, and sitter, Jannie Fulford. Words of comfort may be shared with the family at www.crawfordacrim.com.

The family of Mrs. Carolyn Miller Delk Champion created this Life Tributes page to make it easy to share your memories.