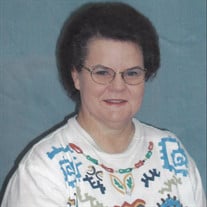 Funeral services for Mrs. Carolyn Joyce Furguson, 72, of New London, will be at 10:00 a.m., Wednesday, March 2, 2022 at Crawford - A. Crim Funeral Home chapel with Rev. Doyle Sumrall officiating. Interment will follow at Pleasant Hill Cemetery under the direction of Crawford - A. Crim Funeral Home of Henderson. Visitation will be from 5:00 - 7:00 p.m., Tuesday, March 1 at the funeral home. Mrs. Furguson passed away Sunday, Feb. 27, 2022 at Hospice of East Texas in Tyler. She was born Feb. 11, 1950 in Henderson to the late Fred and Hazel (Harrod) Stewart. Carolyn had worked as a Cook for the West Rusk ISD. She loved her animals and coloring, and was affectionately known to her family as their "old crazy lady." In addition to her parents, she was preceded in death by her sister, Betty Wagner. Survivors include: her husband of 53 years, Robert Furguson of New London; son, David Furguson of New London, and daughter, Teresa Allen of Kilgore; three grandchildren, Amber Rae of Henderson, Shawn Allen of Kilgore, and Alex Jones of Henderson; two great-grandchildren, A'Ja Coleman and Jagger Cooper, both of Henderson; sister, Dorothy Brunson and husband Roy of Karnak; and several nieces and nephews. Pallbearers are Lucas Furguson, John Furguson, Steve Furguson, Joe Brunson, John Brunson, Randy Furguson, and Jason Welchel. Honorary pallbearer is David Kinsler. Condolences may be made at www.crawfordacrim.com.

The family of Mrs. Carolyn Joyce Furguson created this Life Tributes page to make it easy to share your memories.