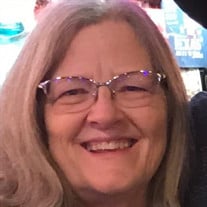 “When it’s my time to go and I’m at the end of my road I’ll be fine I know, I’ll be right at home in heaven.” ~ Kevin Fowler Carolyn Forman Layne was born on November 21, 1950 in Sour Lake, Texas to Roy Benjamin Forman and Fannie Mae Forman. She died January 8, 2021 after an extended illness. Not many people are lucky enough to find the love of their life at a young age, but Carolyn found her lifelong sweetheart in Arthur “A.L.” Layne as a teenager and eloped to marry the man of her dreams on August 23, 1969. Carolyn and A.L. made their home in Henderson, Texas, where they raised their two daughters, Stacie and Pam. Though Carolyn and A.L. were 100% Texan through and through, their travels took them far and wide across the U.S. For many years, they packed up their RV and headed out to visit state and national parks, attend music festivals, and visit family and friends. Many a happy evening was spent dancing the night away in the company of good friends at Kevin Fowler concerts! Carolyn spent her career working for Citizens National Bank where she made many lifelong friends, but her best days were waiting for her in retirement when she was able to spend so much time with her beloved grandchildren. It’s quite possible no one has ever loved being “Gigi” more than Carolyn did. She was at her happiest snuggling on the couch with Laynie or listening to music and watching Red Sox games with Andrew. While COVID-19 took the life of the woman we called wife, mom, and Gigi, we know that nothing could take away her beautiful spirit. A private burial is planned to celebrate the memory of a life well lived. A register book will be available to sign from 8 a.m. until 6 p.m. on Wednesday, January 13, and friends and family are welcome to come by and pay their respects. Carolyn is survived by her husband of 51 years A.L. of Henderson; her daughter Stacie Layne Virden, husband Ryan, and their son Andrew of Waco, and her daughter Pamela Kaye Gregory, husband Steven, and their daughter Laynie of Henderson. She also leaves behind her sister, Linda Phillips, and many nieces and nephews. Carolyn also leaves behind many of her daughters’ friends that she considered her “adopted” children. In lieu of flowers, memorial donations may be made to Rusk County Pets Alive! at PO Box 106, Henderson, TX 75653, the Salvation Army of Rusk County at 769 Highway 64 West, Henderson, TX 75652, and/or the Combat Warriors Inc.- East Texas at www.combatwarriorsinc.com. “Do not fear, for I am with you.” ~ Isaiah 41:10

The family of Mrs. Carolyn Forman Layne created this Life Tributes page to make it easy to share your memories.