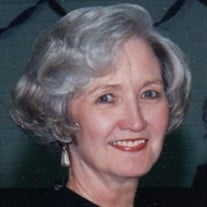 Carolyn Kay Harris Barnett was welcomed into heaven by her Lord and Savior, Jesus Christ on Thursday, December 16, 2021 at the age of 84. Carolyn was born on September 21, 1937 in Henderson, Texas to Wilford and Mattie Harris. She lived most of her life in Rusk County and attended public school at Henderson ISD. Carolyn was an active member of the band as a twirler and was an HHS graduate of the Class of 1955. She attended Stephen F. Austin State University where she earned her Bachelor’s and Master’s degree in Elementary Education. While a freshman at SFA, Carolyn met her future husband, Earl Barnett, and they were married on November 24, 1956 at First Baptist Church of Henderson. They moved to West Texas where her husband coached for ten years at Whitney and Eldorado. Both of their daughters, Jana and Julie were born in San Angelo. Fate brought them back to Rusk County for two years in Carlisle and the next 53 years at the same address in Henderson, Texas. Carolyn taught Elementary school at Henderson ISD for 32 years before retiring in 1999. She felt that teaching was her calling and she developed lasting relationships with her students, fellow teachers, and administrators. She served as President of the local chapter of Delta Kappa Gamma, an organization for women in education. After retiring, she enjoyed time with her growing family and attending all of their activities and sporting events. She and Earl spent any free time traveling around the U.S. in their RV. She was known affectionately as “Grandmother” to her grandkids who loved her cooking, especially her famous pecan pie and chocolate chip pound cake. Carolyn loved her family, but her faith brought her the joy and strength in this life. She accepted Jesus Christ as her Lord and Savior at an early age. She worshipped and served for over 60 years at First Baptist Church of Henderson. She and Earl enjoyed many mission trips with the Volunteer Christian Builders each summer. Her closest friendships were the ladies in the Ruth Sunday School Class. Family preceding her in death were her parents; grandson, Collin Hurt; sister, Bobbie Hinsley and husband Melvin; and nephew, Neil Hinsley. Carolyn is survived by her husband of 65 years, Earl Barnett; daughters, Jana Hurt and husband Craig of Henderson, and Julie Barnett Beck of Henderson; grandchildren, Cace Hurt and wife Melissa of Flint, Cramer Hurt and wife Katy of Dallas, Jaci Hurt of Dallas, Jenna Green and husband Bret of Henderson, and Jordan Toon of Henderson; great-grandchildren, Judah, Eli, Abigail, Lake and Molly Kate Hurt, and Chandler and Cohen Green. The family will receive friends from 3-5 p.m. on Sunday, December 19, 2021 at the funeral home. Funeral services for Mrs. Barnett will be held at 10:00 a.m. on Monday, December 20, 2021 in the chapel at Crawford-A. Crim Funeral Home with Dr. David Higgs and Rev. Mike Ledbetter officiating. Interment will follow at Lakewood Memorial Park under the direction of Crawford-A. Crim Funeral Home. Pallbearers will be Scott Crawford, David Harris, Ray Deason, Damon Bishop, Cliff Hurt, and Mark Gibson. The family would like to express sincere appreciation to Angel Care Hospice and Autumn Leaves Nursing Staff. Words of comfort may be shared with the family at www.crawfordacrim.com.

Carolyn Kay Harris Barnett was welcomed into heaven by her Lord and Savior, Jesus Christ on Thursday, December 16, 2021 at the age of 84. Carolyn was born on September 21, 1937 in Henderson, Texas to Wilford and Mattie Harris. She lived most... View Obituary & Service Information

The family of Mrs. Carolyn Barnett created this Life Tributes page to make it easy to share your memories.

Carolyn Kay Harris Barnett was welcomed into heaven by her Lord...