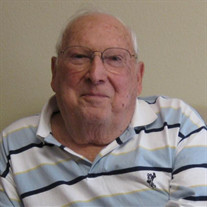 Carl Edward Huckabay, of Henderson, passed away Nov. 13, 2017 at the age of 90. Graveside services will be at 10:00 a.m., Saturday, Nov. 18, 2017 at Lakewood Memorial Park with Rev. David Luckert officiating. Interment will follow under the direction of Crawford-A. Crim Funeral Home of Henderson. He lived his last days at Atria, an assisted living facility in Carrollton, TX, near his daughter. He was born in Eldorado, AR to Carl L. and Miriam Taylor Huckabay. His formative years were spent in Longview, where he graduated from Longview High School in 1943. He enlisted in the U.S. Navy and served as a Corpsman during WWII. He met Mary Higgins while attending Baylor University and they married on April 13, 1947. They moved to Austin, where Carl finished his education as a Petroleum Engineer at the University of Texas. They were married for 65 years until Mary's death in 2013. Carl worked for Marathon Oil Co. for 37 years, retiring in 1986 to Henderson, TX. He was a Master Mason for over 60 years. Carl was famous for his stories of all kinds, rich with details, people, and places pulled from his amazing memory. Carl was an avid fisherman, hunter, and golfer. He was preceded in death by his wife, Mary Higgins Huckabay. He is survived by his daughter, Kate Yarbrough and husband Claibe, and their sons, William (Kim), David (Emma), and Ben, by Carl's son David Huckabay and his wife Kathy and their daughters, Sarah and Alison, and Alison's sons Dean and Jace, and by several cousins including Barbara Zachary (Wayne) and their son, David. In lieu of flowers, memorials may be made to St. Matthews Episcopal Church, at 214 College Ave., Henderson, TX 75654, or to the Grand Lodge of Texas, Clinton Lodge No. 23, AF & AM, PO Box 54, Henderson, TX 75654. Condolences may be made online at www.crawfordacrim.com.

Carl Edward Huckabay, of Henderson, passed away Nov. 13, 2017 at the age of 90. Graveside services will be at 10:00 a.m., Saturday, Nov. 18, 2017 at Lakewood Memorial Park with Rev. David Luckert officiating. Interment will follow under the... View Obituary & Service Information

The family of Mr. Carl Edward Huckabay created this Life Tributes page to make it easy to share your memories.