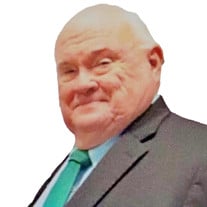 Curtis Larry Smith was a civic leader, educator, athletic booster and force of nature. He passed away on Friday, October 22, leaving a host of grieving family and friends. C. Larry was born on January 13, 1945, to Curtis and Mary Effie Smith. He grew up in Tatum and attended Tatum High School, where he excelled in sports and vocational agriculture. He received both his bachelor’s and master’s degrees from Stephen F. Austin University. He taught history at Marshall High School, worked for Texas Utilities, and was a devoted rancher at his beloved Nip-N-Tuck Ranch. On his Facebook page he listed his employment as CEO at “in the Hay Field.” C. Larry was also the developer of the Cherokee Crossing subdivision in Tatum. C. Larry’s love of Tatum schools and Tatum athletics is legendary. Any day of the week he could be found at sporting events cheering on his Eagles. and he served for many years as the enthusiastic president of the Tatum Booster Club. His commitment to education led him to serve on the school board of the Tatum Independent School District, including as president of the Board. He also served as president of the Tatum Lions Club, president of Harmony Hill Cemetery Association, a force behind the Tatum Ex-Students Association and as a member of the Tatum Volunteer Fire Department. A lifelong member of the First Baptist Church of Tatum, C. Larry was a devoted part of the congregation of Tatum United Methodist Church for the past 12 years. He supported every activity the church engaged in. C. Larry truly had a servant’s heart, and he was especially sensitive to the needs of the elderly. He always extended kindness and friendship to his elders and spent time daily with his special friends in the coffee room at Texas Bank of Tatum. He is preceded in death by his beloved granddaughter, Sarah Paige Stanfield, and his parents Curtis R. and Mary Effie Smith. Also preceding him in death were his grandparents, R.E. (Doc) and Minnie Belle Menefee Young and James A.J. and Martha Ann Wylie Smith. C. Larry is survived by his wife of 47 years, Nancy Ross Smith, and their three children, Suzy Smith Swanson and her husband Chad, Tate Ross Smith and his wife Tiffany, and Curt Young Smith and his wife Alicia. He is also survived by his adored grandchildren, Cannon Young Smith, Addison Mary Smith, Caroline Mae Smith, Gentry Lynn Smith, Darby Tate Smith, and Gracen Hope Swanson. Surviving brothers are Ross Menefee Smith and James Robert Smith and their spouses, and nieces Christine Victoria Smith and Allison Smith Copple and spouse, and great-nephews Henry Orlando Copple and Theodore Ross Copple. Visitation will be on Monday, October 25, from 5:00 to 6:30 p.m. at Crawford-A-Crim Funeral Home, 1414 South Main, Henderson, Texas. Services will be at 2:00 p.m. on Tuesday, October 26 at Crawford-A-Crim Funeral Home. Officiating will be C. Larry’s cousins, Gerald Griffin and Michael Wright. Interment will follow at Harmony Hill Cemetery. In lieu of flowers, the family asks that memorials be made to the C. Larry Smith Scholarship Fund for graduates of Tatum High School. Memorials may be mailed to the Tatum Ex-Students Association, P.O. Box 975, Tatum, Texas 75691 Pallbearers will be Stephen Skinner, Matt Crawford, Dr. J. P. Richardson, Cannon Young Smith, Daniel Copple, and Darin Anthony. Honorary pallbearers will be Bobby Tuttle, Rosser Crawford, Don Lewis, Jerry Hudman, David Weaver, Robert Kuykendal, Hugh Martin, Keith Williams, John Gray, and the Coffee Drinkers at Texas Bank of Tatum. Words of comfort may be shared with the family at www.crawfordacrim.com.

Curtis Larry Smith was a civic leader, educator, athletic booster and force of nature. He passed away on Friday, October 22, leaving a host of grieving family and friends. C. Larry was born on January 13, 1945, to Curtis and Mary Effie Smith.... View Obituary & Service Information

The family of Mr. C. Larry Smith created this Life Tributes page to make it easy to share your memories.