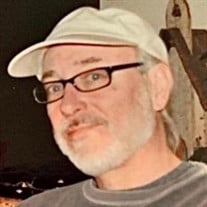 The family of John Bruce Tate will hold a graveside service at Rusk County Memorial Gardens with Dr. David Higgs officiating under the direction of Crawford-A. Crim Funeral Home of Henderson. Mr. Tate passed away Wednesday, April 1, 2020 at UT Health Tyler. He was born March 4, 1956 in Henderson, Texas and was a life-long resident of Rusk County and member of the First Baptist Church of Henderson. Upon graduation from Henderson High School in 1974, Bruce earned his Associate’s Degree in Music from Kilgore College in 1976 and played an active role in the Kilgore College Band and Jazz Ensemble. He went on to attend University of North Texas where he studied Marketing and Music. While studying at UNT College of Music, Bruce was a member of the award winning One O’Clock Lab Band. Possessing a lifelong passion for music, he was an avid jazz musician, writer and composer. He performed with jazz notables including Joe Sample and other bands around Texas in the 1980’s before returning to Henderson. Bruce was known for his kind heart and gentle spirit. He was patriotic, enjoyed military history, and cherished spending time with his mother and precious adopted cats, Gracey and B.B. Preceded in death by his father, Milford Tate, Bruce is survived by his mother, Jean Tate of Henderson, Aunt Ernestine Tate of Waco, Aunt and Uncle, Wanda and Billy Joe Young of Longview, and a host of loving Tate and Hardwick cousins. He will be especially missed by his lifelong friends, Donny and Tammy Blair, Roger and Jan Johnson Spann and Richard and Glenda Wallace. Memorial contributions may be made to the First Baptist Church Music Ministry, 207 W. Main St., Henderson, TX 75652. Condolences may be made at www.crawfordacrim.com.

The family of Mr. Bruce Tate created this Life Tributes page to make it easy to share your memories.

The family of John Bruce Tate will hold a graveside service at...