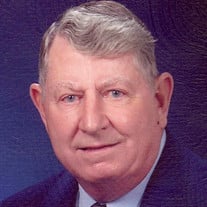 Bruce Alan Hobbs, 82, of Henderson passed from this life on July 11, 2018, in Oklahoma City, Oklahoma. He was born Feb. 1, 1936, in Wilson, Texas to the late Jack Lavoisher and Velma Lou (Dawson) Hobbs. Bruce was raised in the Lubbock, Texas area with his younger sister. At high school in Hale Center, Texas (near Lubbock) he was the band’s drum major, played saxophone, and a song leader at church. His love of music continued throughout his life. At a young age, Bruce began his lifelong ability to create or repair all things mechanical by helping his parents own and operate the first electric washateria (laundromat) in Lubbock, working on the family’s cotton & wheat farm and later as an electrician for the City of Lubbock. As a teenager, Bruce had ice-skating experience, but he switched to roller-skating in Lubbock and was an avid skater. Bruce smoothly completed jumps and spins on roller skates (he was quite good!). In February 1955, at a skating rink, Bruce met Dora Mae Thompson (who couldn’t skate a lick), when he offered to help her up from a fall on the skating rink floor. Although Dora never learned to skate well, love was born. Both 19, they married August 12, 1955 and soon after moved to Hale Center where he returned to farming with his parents. Two children, Russell and Sandra, came along, and he earned his airplane pilot’s license. He bought a single engine plane and flew the family around Texas. Loving flying more than farming, he also became a licensed helicopter pilot. In 1966, the family moved to Mineral Wells, Texas where Bruce was a helicopter flight instructor at Fort Walters Air Force Base during the Vietnam War. In 1972 the family moved onto 60 acres in Henderson, Texas after he began flying for Petroleum Helicopters, Inc. transporting crew changes and supplies to off-shore oilrigs located in the Gulf of Mexico and Honduras. He also was the mechanic for his aircraft to ensure safety guidelines were implemented. At home, he raised Beefmaster cattle primarily to graze the improved grass pastures he tirelessly cared for. His children (mainly Russell) helped him work the cows, bottle feed calves, build endless six-string barbed wire fence, hold tools, stack hay and drive the tractor as he worked, worked, and worked some more. Any weeds faced certain death on his property. Every vehicle had a detailed maintenance schedule strictly executed. In 1992, he suffered a brain stem injury while on an oil rig in the Gulf of Mexico. Until his passing, his wife cared for him as his abilities gradually faded. They had many wonderful daily memories with each other and enjoyed their growing family. They traveled to Colorado, Canada twice, enjoyed a family Alaskan Cruise, and he toured Europe. He continued to work his 60 acres for many years. He was an avid reader, especially World War II, he loved music (without drums), singing, the Dallas Cowboys and pets. The last year of his life, he became a man of prayer, and he was an inspiration to the church with his regular Sunday attendance and enthusiastic singing despite his health problems. He was generous to the end. Words will never express how much his family admired him for his ability to make people grin, his problem-solving skills, and for his perseverance. Bruce got things done. Survivors include his wife of almost 63 years, Dora Hobbs of Henderson; son, Russell Hobbs of Houston, Texas; daughter, Sandra Magar (Bob) of Moore, Oklahoma; sister, Kay Lawhon (Jerry) of Georgetown, Texas; grandchildren, Megan McCormack (fiancé Andrew), Sarah Ochsankehl (Andy), Tasha Peterson (Justin), Logan Cravey, and Morgan Cravey; and great-grandchildren, Daria Arnold, William Ochsankehl, Madeline Ochsankehl, and baby Ochsankehl arriving this Fall. Funeral services will be held at 10:00 a.m. on Saturday, July 21, 2018 at South Main Church of Christ with Bro. Leroy Sedgwick and Bro. Bob Payne officiating. Interment will follow at Lakewood Memorial Park under the direction of Crawford-A. Crim Funeral Home. The family will receive friends from 5-7 p.m. on Friday, July 20, at Crawford-A. Crim Funeral Home. Pallbearers are Russell Hobbs, Logan Cravey, Bob Magar, Andy Ochsankehl, Justin Peterson, and Andrew Bostick. Memorials may be made to the Wounded Warrior Project, PO Box 758517, Topeka, Kansas 66675-8517. The family is grateful to all the care-givers throughout Bruce’s life. Words of comfort may be shared with the family at www.crawfordacrim.com.

Bruce Alan Hobbs, 82, of Henderson passed from this life on July 11, 2018, in Oklahoma City, Oklahoma. He was born Feb. 1, 1936, in Wilson, Texas to the late Jack Lavoisher and Velma Lou (Dawson) Hobbs. Bruce was raised in the Lubbock, Texas... View Obituary & Service Information

The family of Mr. Bruce Hobbs created this Life Tributes page to make it easy to share your memories.

Bruce Alan Hobbs, 82, of Henderson passed from this life on July...