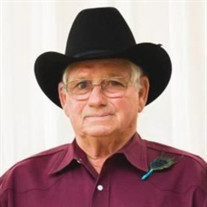 Funeral services for Mr. Bobby Lynn Weatherford, 87, of Long Branch, will be held at 2:00 p.m. on Thursday, May 12, 2022, at Bar None Cowboy Church with Jason Taylor officiating. Interment will follow at Rusk County Memorial Gardens under the direction of Crawford-A. Crim Funeral Home. The family will receive friends from 1:00 p.m. until service time on Thursday, at the church. Mr. Weatherford passed from this life on May 10, 2022, at his residence. He was born April 17, 1935, in Henderson to the late Jule and Loree (Sanders) Weatherford and has lived most of his life in Rusk County where he was a member of, and attended, Bar None Cowboy Church. Bobby graduated from Henderson High School and went on to Kilgore College where he graduated with a degree in oil and gas engineering. He worked in oil and gas before becoming a truck driver with HB Zachry Construction. Bobby was a hard-working man, a rancher, and drove cattle trucks as well as bailed and delivered hay. He was also a good horseman and loved a good hunting and cow dog. He was even inducted into the Black Mouth Cur Breeders Hall of Fame. In addition to his parents, he was preceded in death by his wife and the mother of his children Patsy Weatherford, second wife Mary Sue Weatherford, granddaughter Kasey Weatherford, step-son Jaylon Gray, and brother Bo Jim Weatherford. Survivors include his children, Bobbye Diane Weatherford of Long Branch, Sabrena Weatherford of Long Branch, and Derrell Lynn Weatherford and wife Kim of Liberty City; step-sons, Bret Gray of Vidor and Bart Gray of Texarkana; sisters, JoAnne Kittrell of Henderson and Julia Faye Hammett and husband Russell of Henderson; grandchildren, Jennifer Williams, Chris Scott and wife Danielle, Bo Scott, and Tyler Weatherford; great-grandchildren, Taylon Williams, Zander Williams, Tanna Pollard, Zayden Rosson, Journee Weatherford, and Waylon Weatherford Scott; great-great-grandson, Kingston Layton; as well as a host of nieces, nephews, other family, friends and outlaws. Pallbearers will be Chris Scott, Bo Scott, Tyler Weatherford, Randy Duke, Kirby Gilfillian, and Ronnie Whitten. Honorary pallbearers will be Bobby Brady, George Cooper, Harland Quinalty, Justin Horton, and Mack Pool. Words of comfort may be shared with the family at www.crawfordacrim.com.

Funeral services for Mr. Bobby Lynn Weatherford, 87, of Long Branch, will be held at 2:00 p.m. on Thursday, May 12, 2022, at Bar None Cowboy Church with Jason Taylor officiating. Interment will follow at Rusk County Memorial Gardens under the... View Obituary & Service Information

The family of Mr. Bobby Lynn Weatherford created this Life Tributes page to make it easy to share your memories.