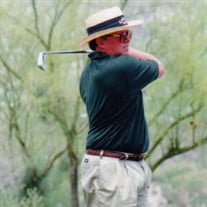 Graveside services for Mr. Bob Wilson, 82, of Henderson, will be at 2:00 p.m., Tuesday, May 11, 2021 at Lakewood Memorial Park. Interment will follow under the direction of Crawford - A. Crim Funeral Home of Henderson. Visitation will be from 5:00 - 7:00 p.m., Monday, May 10, 2021 at the funeral home. Mr. Wilson passed away Thursday, May 6, 2021 at his residence. He was born March 9, 1939 in Topeka, KS to the late George and Alice Wilson. After the death of his mother, Alice at age 9, he was sent to live with her Norwegian relatives on a family farm in Wisconsin for several years before moving back to Dallas. He graduated from Woodrow Wilson High School in 1957. He worked his way through college by being a claims adjuster for Aetna. Upon receiving his Degree in Business Administration from the University of North Texas in 1963, Aetna made him the Manager of their El Paso office. In 1968 his father-in-law, Doug Townley, asked him to come and help run the family business so they loaded up everything and moved to Henderson. He helped run that business for 51 years. Bob was a guy's "guy." He loved to have fun. He was an avid golfer, loved to go fishing, enjoyed riding four-wheelers and just having a good time. In addition to his parents, he was preceded in death by his wife of 57 years, Jimmie Townley Wilson. Survivors include: two daughters, Julie Wilson Lee of Tyler, and Allyson Wilson Smith and husband Chad of Henderson; brother, Tom Wilson of Tulsa, OK; three grandchildren, Jordan Roberts of Dallas, Payton Roberts of Tyler, and Jacob Lee of Tyler; great-granddaughter, Riley Henson; and nephew, Rob Wilson and wife Anne of Austin. Honorary pallbearers are Tom Wilson, Trey Hacker, Sam Stokes, Joel Hale, Dean McNew, Brent Wilder, and Jacob Lee. Condolences may be made at www.crawfordacrim.com.

Graveside services for Mr. Bob Wilson, 82, of Henderson, will be at 2:00 p.m., Tuesday, May 11, 2021 at Lakewood Memorial Park. Interment will follow under the direction of Crawford - A. Crim Funeral Home of Henderson. Visitation will be from... View Obituary & Service Information

The family of Mr. Bob Wilson created this Life Tributes page to make it easy to share your memories.

Graveside services for Mr. Bob Wilson, 82, of Henderson, will...