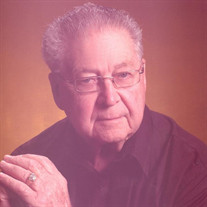 A celebration of the life of Bob “Bumpa” Schauwecker, 82, of Henderson, will be held at 11:00 am Saturday, December 22, 2018, at First Presbyterian Church with Rev. Ted Foote officiating. It will be under the direction of Crawford-A. Crim Funeral Home. The family will receive friends following the service in the Fellowship Hall at the church. Mr. Schauwecker went to be with his Lord and Savior on December 15, 2018. He was born July 23, 1936, in Hyannis, Mass. to the late Frederick C. and Florence (Thacher) Schauwecker. After attending college, Bob served his country in the United States Air Force from 1957-1961, earning the rank of Airman 1st Class. His service brought him to Texas where he met and later married the love of his life, Lavonne Claxton, on October 12, 1958. After his service, Bob began a 31 year career with Texas Utilities in Colorado City. While there, he was raised to the sublime degree of a Master Mason with Mitchell Lodge #563. His career with TXU brought him to Henderson in 1976 where he later retired as an Area Supervisor. Bob was an active member and faithful servant of First Presbyterian Church of Henderson. In addition to his parents, he was preceded in death by his granddaughter, Jessica Roach; grandson, Tanner Schauwecker; and brother, Fredrick C. Schauwecker. Survivors include his wife of 60 years, Lavonne Schauwecker of Henderson; children, Belinda G. Riddle and husband Michael of Brownwood, Steven R. Schauwecker and wife Melanie of Henderson, and Terry D. Ramirez and husband Mario of Tyler; siblings, Jeanette Whittemore, Allen T. Schauwecker, and Freida A.White, all of Yarmouth, Mass.; and nine grandchildren and seven great-grandchildren. Honorary pallbearers will be Mario Ramirez Jr., Matthew Ramirez, Taylor Schauwecker, Thacher Riddle, Kaden Roach, Stephen Hathaway, Carson Hutson, and Travis Watson. In lieu of flowers, memorial donations may be made to First Presbyterian Church at 311 S. High St., Henderson, TX 75654. Words of comfort may be shared with the family at www.crawfordacrim.com.

A celebration of the life of Bob &#8220;Bumpa&#8221; Schauwecker, 82, of Henderson, will be held at 11:00 am Saturday, December 22, 2018, at First Presbyterian Church with Rev. Ted Foote officiating. It will be under the direction of Crawford-A.... View Obituary & Service Information

The family of Mr. Bob "Bumpa" Schauwecker created this Life Tributes page to make it easy to share your memories.