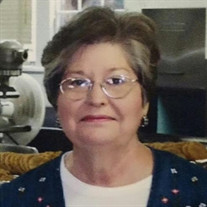 Funeral services for Ms. Blanch E. Maynard, 81, of Henderson, will be held at 2:00 p.m. on Thursday, January 4, 2018, in the chapel at Crawford-A. Crim Funeral Home with Rev. Chad Hlavaty officiating. Interment will follow at Mt. Hope Cemetery under the direction of Crawford-A. Crim Funeral Home. The family will receive friends from 1:00 p.m. until service time on Thursday, at the funeral home. Ms. Maynard passed from this life on December 29, 2017, at Good Shepherd Medical Center in Longview. She was born April 11, 1936, in Rusk County to the late Horace and Lilliar (Collier) Maynard and spent most all of her life in Rusk County. Blanch was a 1954 graduate of Gaston High School and attended North Texas Teacher's College, now the University of North Texas, in Denton. She went on to work as a secretary for the American Red Cross in Dallas for 10 years. Ms. Maynard was an avid animal lover and a wonderful cook. She was also very creative and quite artistic. She held certificates in floral arranging, cake baking, and was a gifted seamstress who could make clothing that looked better than what you could find in a store. Blanch was also a CNA and a certified sitter and used those skills to care for the sick and elderly, especially family. She grew up as a member of Cumberland Presbyterian Church where she was later nominated as an elder for life by the Presbyterian Council. In addition to her parents, she was preceded in death by brothers Kenneth and Homer Maynard, sisters Vivian Satterwhite and Maudie Williams, and nephews Michael Arden, Paul Maynard, and William Lee Maynard. Survivors include sisters Lillian Lee of Vidor and Billie Jean Arden of Kilgore, nieces and nephews Lynn Arden, Terry Arden, Kevin Arden, Lori Rosas, Billy Eugene Williams, Ronny Williams, Barbara Michael, Kenny Maynard, Carl Laverne Maynard, and Elmer Ray White, as well as a host of great-nieces and nephews and other family. Words of comfort may be shared with the family at www.crawfordacrim.com.

The family of Ms. Blanch E. Maynard created this Life Tributes page to make it easy to share your memories.