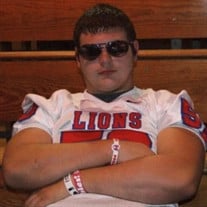 Funeral services for Mr. Blade Gillispie, 27, of Henderson, will be at held 2:00 p.m., Saturday, Feb. 27, 2021 at Crawford - A. Crim Funeral Home chapel with Bro. John Wallingford officiating. Interment will follow at Lakewood Memorial Park under the direction of Crawford-A. Crim Funeral Home of Henderson. Visitation will be from 6:00-8:00 p.m., Friday, Feb. 26, 2021 at the funeral home. Mr. Gillispie passed away February 21, 2021 in Tyler. He was born April 13, 1993 in Henderson, and worked for H-Force, and was known to be a hard worker. He graduated from Henderson High School in 2011, and was a player on the 2010 State Champion Henderson Lion Football team. He also was involved in the wrestling program. He knew how to make people laugh, and his friends thought very highly of him. Most of all he enjoyed being with his son Greyson. He was preceded in death by his grandfathers, James Reynolds and Jimmy Jones, and grandparents, Lloyd and Nell Bearden. Survivors include: parents, Frank and Tammy Bearden, and son, Greyson Gillispie, all of Henderson; sister, Alicia Gillispie and her fiance Tyler Stokes, of Henderson, and his niece, Rylee Stokes, sisters, Krystal Gillispie of Logansport, LA, and Britney Castle and husband Joe of Nacogdoches; grandmothers, Linda Starkey of Mt. Enterprise, and Pat Jones of Tennessee Colony; and numerous aunts and uncles. Pallbearers will be Evan Dennis, Dually Wallace, Michael Cunningham, Tanner Pool, Deveron Powell, Cord Fletcher, Corey Fletcher, and Kolby Holliday. Honorary pallbearers are Todd Wallingford, Tyler Stokes, Brenden Brown, H-Force employees, and the HHS Class of 2011. Condolences may be made at www.crawfordacrim.com.

The family of Mr. Blade Gillispie created this Life Tributes page to make it easy to share your memories.

Funeral services for Mr. Blade Gillispie, 27, of Henderson, will...