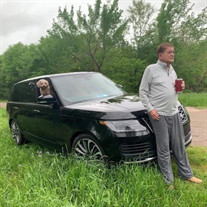 A celebration of the life of Mr. Billy Todd Bryan, 75, of Laneville, will be held at 2:00 p.m. on Tuesday, February 23, 2021, in the chapel at Crawford-A. Crim Funeral Home with Rev. Tommy Marshall officiating. Interment will follow at Laneville Cemetery under the direction of Crawford-A. Crim Funeral Home. The family will receive friends from 1:00 p.m. until service time on Tuesday, at the funeral home. Due to the current COVID-19 pandemic, masks or face coverings are strongly recommended, however not required, for the health and safety of all those in attendance for a visitation or service. Mr. Bryan passed from this life on February 20, 2021, at his residence surrounded by his loving family. He was born February 5, 1946, in Henderson to the late William E. “Bill” Bryan and Ethel (Todd) Bryan and spent most all of his life in Laneville. Billy Todd graduated from Laneville High School and went on to Kilgore Junior College. Mr. Bryan also served his country proudly and honorably in the United States Air Force. He was also a long-time member of First Baptist Church of Laneville. Bryan & Bryan Asphalt is a family-owned company founded in 1955 by W.E. “Bill” Bryan (BT’s Dad). BT joined the company full-time in 1966, doing everything from driving trucks to taking care of customers. BT became partner in the company in 1972 and later became full owner in 1994. What started out as a one-man operation grew under BT’s superior guidance to a fleet of 21 trucks, a Rail Terminal, Sand Pit, and Asphalt Terminal. Once Bryan & Bryan Asphalt began to grow, BT hired Charles Moore, Ross Hicks, Tom O’Leary and Tim Brittain to head operations and sales. With these hires and BT’s exceptional business intuition, Bryan & Bryan became a leading force in the asphalt industry. Bryan & Bryan Asphalt supplies products and services throughout East Texas and Shreveport, Louisiana. BT later sold Bryan & Bryan to Ergon Asphalt & Emulsions, Inc. which made BT and his family very proud. BT married his high school sweetheart, Charlotte Jo (Pirtle) Bryan on June 11, 1966, and they shared 54 years of life, laughter and love. His love for her was absolute and never ending. From their union came a daughter Tina Dukes and husband Jiffy, grandson Jacob Moore and wife Tiffany and their children Bradyn and Abby Moore, granddaughter Samantha Cryer and husband Chris and their children Lottie and Ryan Cryer, and grandson Marcus Dukes, daughter Tamra McClendon and husband Cody, grandson Cason Shipp and wife Caroline Davis, granddaughter Kayla Hays and husband Jason and their children Acelyn Jo Stewart and Aubrey Kay Hays, grandsons Hazen and Arrington Adkison, and without a doubt his love fur daughter Maude. In addition to his parents, BT was preceded in death by his granddaughter, angel Baby Girl Adkison, as well as his uncles, aunts, and other beloved family. Mr. Bryan was a self-assured, yet humble man that loved to be happy, and he was a great teacher and mentor. He made friends easily and often and was fiercely loyal. BT loved his family furiously. He was their rock and fearless leader. He also enjoyed raising white-tail deer for his family’s enjoyment. Those honoring BT as pallbearers will be Cason Shipp, Cody McClendon, Jiffy Dukes, Jason Hays, Tom O’Leary, Ross Hicks, Tim Brittain, Luis Sanchez, Jacob Moore, and Chris Cryer. Honorary pallbearers will be his Ergon family, James Donald Bryan, Ike Bryan, Glen Follwill, his Delek colleagues, and Los Magnificos Diez. In lieu of flowers, memorial donations may be made to the ALS Association at 14555 Dallas Parkway Suite 100-219, Dallas, Texas 75254 or online at https://www.alstexas.org/. ALS just took the best! Words of comfort may be shared with the family at www.crawfordacrim.com.

A celebration of the life of Mr. Billy Todd Bryan, 75, of Laneville, will be held at 2:00 p.m. on Tuesday, February 23, 2021, in the chapel at Crawford-A. Crim Funeral Home with Rev. Tommy Marshall officiating. Interment will follow at Laneville... View Obituary & Service Information

The family of Mr. Billy Todd Bryan created this Life Tributes page to make it easy to share your memories.

A celebration of the life of Mr. Billy Todd Bryan, 75, of Laneville,...