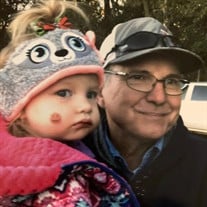 Memorial services for Mr. Billy Alexander, 62, of Henderson, will be held at 2:00 p.m. on Saturday, April 3, 2021, in the chapel at Crawford-A. Crim Funeral Home with James Cobb and Joel Hale officiating. On Monday, March 29, 2021, Billy John Alexander went to be with his Lord and Savior. Bill was born May 29, 1958, and raised in Mount Enterprise, TX, where he met the love of his life, Jo Dale Taylor. They wed on September 2, 1977, and on that day, he gave his life to his family. Out of this communion there were 3 children, Shelton, Zach and Lucy. Every day of his life was committed to giving his children and wife everything they ever wanted and making sure they did not do without. He was the most giving, selfless example of a dad and husband you could ever ask for. His grandkids became the light of his eye. He loved them so much and loved to watch them play sports and play in the backyard. They will always know they were loved by their Papaw. He was an avid Dallas Cowboy fan from birth. His favorite times were spent on Sunday afternoons with his best friend and uncle Pat Fancher and brother in-law Greg Owens watching the Cowboys. He was known by most in town as one of the hardest working men you will ever see. He worked multiple jobs to give his family a good life. He retired from Henderson Independent School District where he got to take care of one of his pride and joys, the Henderson Lion football field. During this time, he also mowed the Rusk County Courthouse for 33 years which was another one of his pride and joys-only using a push mower because a riding mower would not cut the grass as pretty. He could not drive by the Courthouse and see a fallen limb and not pick it up, irritating his family every time. When he retired from HISD he went to work for the Rusk County Airport. He met a lot of great friends over the years that he loved seeing at work and around town. He always looked forward to the Wednesday lunches with all the guys. Our daddy Billy Alexander will be missed every day, but he did his job on earth and now is in Heaven. If he has any pull in heaven the Cowboys will win super bowl 56. Mr. Alexander was preceded in death by his father, Billy Alexander of Mount Enterprise; grandparents, Clara Fancher of Henderson, Authur Fancher of Caledonia, and Dee and Lorene Alexander of Concord. Survivors include his wife of 43 years, Jo Dale Alexander; his children, Shelton Alexander of Austin, Zachary Alexander and wife Whitney of Henderson, and Lucy Thane and husband Dustin of Henderson; mother, Nancy Alexander of Henderson; sister, Kathy Norman of Henderson; uncle, who is thought of as a brother, Pat Fancher of Houston; sister-in-law, Kay Owens and husband Greg of Mount Enterprise; grandchildren, Lily and Evie Alexander of Henderson, Braylie and Lincoln Thane of Henderson, and a host of aunts, uncles, nieces, nephews, and friends who meant a lot to him. Words of comfort may be shared with the family at www.crawfordacrim.com.

Memorial services for Mr. Billy Alexander, 62, of Henderson, will be held at 2:00 p.m. on Saturday, April 3, 2021, in the chapel at Crawford-A. Crim Funeral Home with James Cobb and Joel Hale officiating. On Monday, March 29, 2021, Billy John... View Obituary & Service Information

The family of Mr. Billy Alexander created this Life Tributes page to make it easy to share your memories.