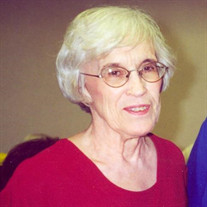 Funeral services for Mrs. Billie Margaret Bassett Reeves, 83, formerly of Henderson, are scheduled for 10:30am Saturday, February 17, 2018, at Trinity Baptist Church with Rev. Michael Cary officiating. Burial will follow at Millville Baptist Church Cemetery under the direction of Crawford-A. Crim Funeral Home. The family will receive friends from 5-7 p.m. on Friday, February 16, at the funeral home. Mrs. Reeves went to be with her Lord and Savior on Thursday, February 15, 2018. She was born in the Millville Community of Rusk County to Curtis James and Lessie Jane Blount Bassett on October 29, 1934. Billie Margaret was a graduate of Henderson High School in 1953. After high school, she carpooled to Tyler for two years with a close cousin to attend Tyler Junior College, where she received an associates degree. She then went to work for Henderson Federal Savings and Loan. While working there, Billie Margaret was given the opportunity to attend North Texas University. She graduated with a degree in Elementary Education. Billie Margaret, though, did not go into teaching, but instead returned to Henderson Federal Savings and Loan, where she worked faithfully and loyally for the next 43 years before retiring in 1997. She was a member of Millville Baptist Church growing up, being baptized in her grandparent’s pond at the age of 12 when a group from Baylor came through the area holding a Vacation Bible School and revival. She later became a member of Trinity Baptist Church. Billie Margaret will be remembered by those who knew her as a woman who loved her God and her family deeply. She was a woman of strong character who did what was right, even when it was hard. She was always fun loving and good with children, whether that was with her own family playing games or with the children she taught for years in Sunday School and on Wednesday nights for Training Union. Being born and raised in the Millville Community gave her a love of red dirt, pine trees, and all things farm related. She loved to walk and work outside in the beauty of East Texas. After living in the area for 73 years, she left her home there and moved to Royse City, Texas, to be close to her only grandchild, Allison. They had a fun time together, including her trying to teach Allison how to cook and sew. She is preceded in death by her parents, Mr. and Mrs. Curtis James Bassett; her husband, William Ray Reeves; and two sisters, Helen Bassett Owens Yearwood and Betty Bassett Little. She is survived by her daughter and son-in-law, Renee and Mark Meadors, and her granddaughter, Allison Meadors, of Fate. She is also survived by one sister, Mozelle Bassett Garrison of Longview; a nephew, Bassett Owens of Dallas; two nieces, Beverly SoRelle and husband, Frank, of Lubbock and Gwendolyn Tomlin and husband, Michael Todd, of Longview; two great nieces, Emily SoRelle of Lubbock and Sarah Wright and husband, Jeff, of Cypress; one great-great-nephew, Garrett Wright of Cypress, and one great-great niece, Grace Wright of Cypress, plus numerous cousins. Pallbearers will be Mack Bassett, Don Bassett, Bobby Bassett, Jeff Wright, Frank SoRelle, and Rodney VanSickle. Honorary Pallbearers will be Bassett Owens, Blake Ballenger, Steve Bassett, Orville Todd, Richard Todd, and Bill Preston. The family would like to extend thanks and appreciation to Rockridge Assisted Living Center, Rockwall, Texas, and to the administration and caregiver staff at Five Star Home Health Agency, with special thanks to caregivers, Annette Robertson and Cindy Massey. Words of comfort may be shared with the family at www.crawfordacrim.com.

The family of Mrs. Billie Margaret Bassett Reeves created this Life Tributes page to make it easy to share your memories.